In this guest blog Buzz Boncath looks at what Ryan Giggs needs to do to ensure top marks in his final end of year test against Denmark and Albania.

Summer’s a memory and if, like me, you’re a parent with kids in school, half term is finished, Hallowe’en is done and we’re heading rapidly towards the festive season with the concerts, nativity plays and Christmas parties it brings. It also means you’ve probably had a chat about your offspring’s performance at parents’ evening.

With Ryan Giggs still learning his trade as an international manager, ahead of Wales’s last competitive game of the calendar year what feedback would Giggs get as the autumn brings the first chapter of his tenure as Wales manager to a close?

The Friday night clash against the Danes at the Cardiff City Stadium will be a significant milestone in his managerial journey, marking the end of his first competitive campaign in charge. The friendly match that follows in Albania will be a further chance to experiment for a man who has already proved that he’s not afraid to make brave choices in tactics and selection.

It’s been well-documented that many Welsh fans were ambivalent to his appointment last January; indeed many were downright hostile. Whilst I didn’t have a clear first choice to take over from Chris Coleman, I wasn’t sure that Giggs was the man for the job for several reasons. But neither was I sure about Coleman’s appointment, and once Giggs got the job we had to give him a chance and see how he fared.  The final game of Wales’s inaugural Nations League campaign seems like a good time to write Giggs’s end of term report after 10 months in the job.

On the whole, I think he’s done well, but there is clearly plenty of work still to do and plenty of room to develop.

So to start right at the beginning, he made a decent first impression and handled his first press conference competently. He addressed many of the things that Welsh fans had questioned about him, particularly his commitment to his country. He appointed his backroom staff swiftly and retained Osian Roberts as one of his lieutenants – a good move as it maintained some continuity for the players and engendered good will from the fans.

When matters moved on to the pitch, how Giggs’s early fixtures in charge fell helped him. His first three games were all away from home and with nothing really riding on them. Persuading Gareth Bale to travel to the other side of the planet for the China Cup was a promising sign and a 6-0 battering of the hosts (our highest away score since 1885!) in the opening game, with Bale scoring a hat-trick and surpassing Ian Rush’s Welsh goalscoring record, was a great way to start. A slightly tame loss to the obviously classy & streetwise Uruguayans in the final denied Giggs the chance to be the first Wales manager since Dave Bowen to actually win silverware, in only his second game in charge. But the China Cup was a positive experience and seemed to be a good way for Giggs to get the know the squad. What was also encouraging was the way he used the wider squad – giving younger and less experienced players international game time was a plus, and set a pattern he’s continued with.

A creditable draw with World Cup-bound Mexico (who reached the second round) followed; that it was achieved with a rookie central defensive pairing of Chris Mepham and Tom Lockyer, after Ashley Williams’s injury, was all the more impressive. Though Wales didn’t, Giggs headed to Russia as a pundit – where a slight mis-step in referring to the English team as “we” raised eyebrows amongst the Red Wall. But then Chris Coleman also did this during the 2014 World Cup and he didn’t do too badly afterwards…

But, as was rightly identified in podcast #66, recorded at the time of Giggs’s appointment, it was his first competitive game in charge at home to Ireland that would be the yardstick for most fans.

There was definitely a sense of looking for revenge against the team who ended Chris Coleman’s World Cup dream only ten months before, and in so doing had burnished the fixture with a growing sense of rivalry. A team selection with a twist, in which a few players regarded as fixtures during Coleman’s tenure weren’t in the starting line-in, surprised some, myself included, but a breathtakingly brilliant display of flowing football swept the seemingly stone-shod Irish away. This was the booting we should have given them during the World Cup qualification campaign, but instead we struggled to deal with Irish obstinacy in those games. 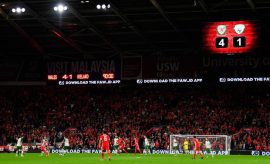 Not this time. Wales refused to be drawn into an arm-wrestle, and instead played with pace and attacking verve that had people comparing it to great Welsh performances of the past. Maybe Giggs could be the man to feed our promising young players into the team, meld them with the experienced talent and take us to Euro 2020.

A sobering 2-0 defeat away to a Christian Eriksen-inspired Denmark a few days later shook out any ideas that Wales might already be the finished article. That fact was underlined by a walloping in the Millennium Stadium to a truly excellent Spanish side. Spain are as good an international team as I’ve seen live in nearly 30 years of watching Wales, and that they were able thrash us so convincingly without getting into top gear is a measure of their quality. What was pleasing about the game was that Wales stuck to the task. Although the game was over as a contest within 30 minutes and Spain were always comfortable, when Giggs, a little belatedly (another learning point), changed the team set-up to introduce more pace into our attack, we were able to get a goal at the end of the game to end on a positive note and demonstrate some resilience and resolution.

Those were both qualities that a young Wales side again showed to secure the win in Dublin in the next match. Without our talismanic totems of Bale and Ramsey, a poor quality first half made me wonder whether it would be another night of Irish frustration for us. But with more pace and direction in our play in the second half, combined with some defensive grit and Harry Wilson’s boot, we made our quality count.

Which brings us to Denmark.

The victory in Dublin also secured Wales a place in the pot of second seeds for December’s Euro 2020 qualifying draw. Three points against the Danes will see us top the group and guarantee us a qualification play-off spot for Euro 2020 – should we need it – as well as secure promotion to League A for the next Nations League competition, which starts after the Euros in 2020.

A defeat would mean the Danes get promotion and we stay in League B; while a draw means the group victors depends on the outcome of Ireland’s visit to Aarhus in the final game a few days later. You’d expect the Danes to go on and win that though and that might point to their tactics on the 16 November – they don’t have to win against us and if they are still without Ericksen, they might be tempted to come to Cardiff just to get a point with a game in hand. Ireland in September excepted, we have struggled to break down teams set up to frustrate us before.

For me, the main priority for this Nations League was to ensure that we were in the second pot of seeds for Euro qualifying, so I judge this campaign already a success. The fact that Giggs has managed to do this whilst blooding a cohort of young talent, with more seemingly waiting to come off the conveyor belt. Keeping senior players involved and interested is another big tick in Giggs’s favour.

I think he’s conducted himself well in the role. He seems to have the dressing room and the respect of the players, enjoys good relations with the media and whilst he hasn’t hit the road to attend events around the country to the same extent as his predecessor, he does seem to have silenced criticism from previously sceptical fans.

It is a cliché, but football is a results business. If Giggs passes his most important examination to date by beating Denmark at home, and create some momentum going into next year’s Euro qualifiers, he’d surely earn an A in his end of term report and we could look forward the qualifying draw on 2 December with some confidence.