Last summer Russell Todd and Leon Barton provided a quick run through of suggested close-season Welsh football-related reading. It included autobiographies by the likes of Robbie Savage, Terry Yorath, Joey Jones and Mickey Thomas, and non-fiction books such as Mario Risoli’s account of Wales’ (then) only appearance at a major tournament in When Pele Broke Our Hearts. Not all the books pushed our buttons…

Here’s some further suggested reading; perfect for travelling to Paris.

King Of Soccer by John Charles

Good luck in finding this fascinating book authored by the great man himself in 1957. It comprised part of The Sportsman’s Book Club series and was not available for public sale; fortunately my bibliophile father in law found it in a second hand bookshop in Llangollen. It provides not only for a very frank insight into Charles’ career but does so at a very timely moment as it was published just as he had signed for Juventus. Charles has not yet earned the mantle Il Gigante Buono by adoring Italian fans and media and Wales haven’t yet qualified for the 1958 World Cup in Sweden. Charles broaches a range of topics. He reveals the chasm between the financial rewards available in Italy and the game in England where the maximum wage remains resolutely in place and the removal of which appeared to Charles to be “impracticable”. He deftly explains the subtleties of tax liabilities on wages and signing-on fees should he return to the UK (he left Juventus in 1962, but quickly returned to Roma). He reveals that he preferred playing centre half rather than centre forward and he speculates whether a British team should compete at world cups, in light of Scotland and England’s poor showing in 1954. Nonetheless he also speaks with great pride about representing Wales:

“Only a fool would hate to play in international football. There is something about turning out for your country which does something to you”

Though Charles’ prose is a bit stiff he is forthright, honest and modest in his achievements to date; which, obviously, were about to be wildly surpassed. RT

Fred Keenor: The Man Who Never Gave Up by James Leighton

Keenor is obviously a Cardiff City legend: the local boy who captained the club to the 1927 FA Cup victory; came within a whisker of leading the club to the Championship; and made almost 400 appearances. Curiously, he tends to be talked of in less reverential tones in the context of his international career. Yet he was captain and lynchpin for Wales in three Home Championship victories (1920, 1924, 1928) and two runners-up (1921, 1922), a stalwart for Wales for 12 years in which he won 32 caps, and, most famously, captained ‘The Unknowns’ in a near miraculous 1-1 away draw against a very strong Scotland side. Fortunately, Leighton provides a decent amount of focus on Keenor’s Welsh career and his obvious pride and commitment to the national cause, though, as one would expect, much of the book is about Cardiff City. Leighton is more prosaic than, say, Phil Stead or Mario Risoli in their historical books on Welsh international football and John Charles respectively, but is a competent author. RT 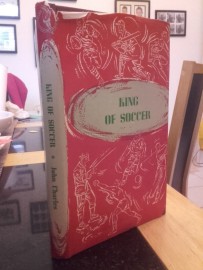 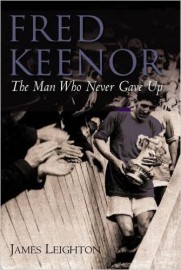 In the Shadow of a Giant by Mel Charles

The title obviously alludes to following in elder brother John’s footsteps and Mel confronts the issue in the first few pages. But efforts to step out of John’s shadow tend to be unsuccessful given the parallels in careers: Mel followed John to Leeds United; both represented Wales at the same time; both could alternate effectively between playing centre half or centre forward; both played in the same Cardiff City team; Mel even worked for John briefly in retirement. Wherever Mel is playing, whatever he is achiveing John serves as a benchmark or comparison. Mel is nothing less than reverential though for his big brother throughout this 2010 autobiography in which, it’s true, The Gentle Giant’s career looms large. But this is to Mel’s detriment at times for he achieved a massive amount in his own right in the game, most notably being selected in the 1958 World Cup team of the tournament; a one time subject of the biggest transfer fee paid between Football League clubs (when he moved to Arsenal from Swansea) and one of only three people to score four in a game for Wales. There’s a healthy balance between his club and international careers with a chapter dedicated to the 1958 World Cup, the highlight of which is his first-hand account of the tussle with Brazil which is usually written about third hand or from a historical perspective. His love of Wales and in particular Swansea are clear throughout, though he confesses that it wasn’t always healthy and he suffered chronic homesickness. Among the many barbs at how modern players don’t know how good they have it and the usual working class cliches about playing football all hours between terraced streets, there are some genuinely insightful tales about professional football in the 1950s and 60s, particularly in relation to the game’s finances. For instance, Mel earned more money from the game playing for Porthmadog than he did as a record transfer at Arsenal. He also provides insight to how primitive the care for injured players could be, such that his knee problems have plagued him since retiring in his mid 30s. Well worth a read for one of Wales’s legends. RT

Thomas may not be as well known as some of the other journalists who wrote books about Wales’s successful Euro 2016 qualifying campaign but he and his publishers Lolfa showed shrewd timing in publishing ahead of the rush. Welsh speakers may already be familiar with his journalism in Golwg.

On the whole Jamie does an admirable job of not just re-stating the facts of the campaign but contextualising it and, as an aspiring journalist should, scratching beneath the veneer to explore the more obscure, hidden and overlooked factors. The chapter in which team psychologist Ian Mitchell explains his methods for preparing not just the players but the coaching team is particularly fascinating. Thomas reveals how meticulously manager and captain press conferences are planned by Mitchell, Chris Coleman and Ashley Williams. It is perhaps easy to assume these are intended to inform and shape public and media opinion; or an obligation to endure. But it is genuinely eye-opening to discover that they are also designed to re-enforce internal squad messages that are planned on a camp by camp basis. In this way it seems the current coaching set-up is not just meticulous, but creative and innovative.

Likewise the chapter in which Jamie interviews Tyler Roberts, captain of the Wales under 16 team, allows us a glimpse at the first-hand experiences of a young player being progressed through Wales’s esteemed pathway structure.

Interviews with ex-players, FAW CEO Jonathan Ford, FAW councillors and media colleagues serve to provide a thorough holistic and longitudinal analysis of the on an off-field developments that have professionalised the Welsh national set-up; though more interrogation of the changes John Toshack implemented would have enhanced this further.

Footballing clichés creep into Thomas’s prose on occasions but as a young man he will continue to refine and hone his craft. For me, the barometer of Welsh footballing writing is rapidly becoming how the writer handles the death of Gary Speed and Thomas is pitch perfect: balancing adulation and respect for Speed’s playing achievements, with an honest critique of his reign as Wales manager, while also capturing the grief poignantly and movingly. A big talent. RT 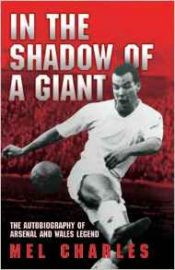 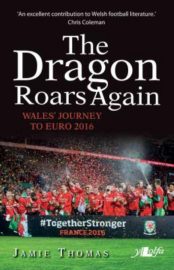 The last time we reviewed Welsh football books, I reviewed Risoli’s first book When Pele Broke Our Hearts, which is all about Wales at the 1958 World Cup.  It is a book I really like, although I did describe Risoli’s writing as “somewhat dry” and went on to say “he’s certainly no prose stylist”.  Much to my surprise Podcast Pêl-droed received an email from the author soon after to thank us for including the book on our list of recommended reading, but also to explain that he “never set out to be the next Nabokov or James Joyce” (!). I considered emailing back to emphasize just how much I still like the book, and that finding things to criticise, even in work I admire, was just a professional hazard for a miserable bastard such as myself. But then my girlfriend said “No, don’t bother. Never apologise for having an opinion”, and I decided she was right…as usual. Actually, who am I kidding? As ALWAYS.

Anyway, as with When Pele Broke Our Hearts, this thorough biography of the great John Charles has at its hearts such a fascinating subject that any quibbles about style are rendered fairly irrelevant.  One of the most interesting things about Charles was the contrast between his brilliance on the football field and sheer incompetence at pretty much everything else.  A string of failed businesses and marriages lead to a retirement spent in a tiny Yorkshire flat, a sad end for one of the greatest players our little country ever produced, or ever will.  The tales of his life in Italy, where unsurprisingly, he was treated like a king, are much more enjoyable to read about as a result.

I recently met Phil Stead, he of Red Dragons fame, and we discussed the number of Welsh football books that have been published of late.  “I was writing about Wales when we were crap!” Stead proudly, defiantly – and quite correctly – boasted. Well, When Pele Broke Our Hearts came out during Bobby Gould’s stint in charge, when Wales were not so much “crap”, rather a national fucking embarrassment.

Bellamy is a walking mass of contradictions: an impetuous hothead who poured much of his personal fortune into setting up a soccer school in war-torn Sierra Leone; a committed family man and self-confessed womaniser; the third most capped Welsh player of all time who, at the same time, hung Bryan Flynn out to dry by not playing for Wales during Flynn’s two match trial as manager (he was fit enough to play for Cardiff City during this period), and the proud Welsh patriot with an Owain Glyndwr tattoo yet went against his national association’s wishes to play for Great Britain at the 2012 Olympics.

Despite some of his heroic deeds in a Welsh shirt (including famous goals versus Italy, Denmark and Argentina and an outrageously brilliant performance away to Slovakia in 2007), Bellamy’s slightly slippery nature means he is a player I would describe more as ‘admired’ rather than universally loved by his nation’s fans. I’ve never found him anything less than fascinating though. He was always a difficult player to ignore, whether on the pitch or off it. Indeed, Bellamy has given some of the most memorable post-match interviews ever recorded. From ‘I know what JT’s like…everyone in football knows what the guy’s like’ to ‘Two poor teams trying to contest this group…neither of whom have a glimmer of hope of qualifying‘ following an awful 2-0 loss at home to Finland, the man has never been anything less than totally honest when asked for an opinion. And maybe that’s the problem when it comes to this (still very readable) book.

Part of what made both of Roy Keane’s autobiographies so utterly absorbing was the man’s public reticence (especially as a player). In the books you finally feel that you’re getting an insight into just what the hell was going on behind that simmering (sometimes scary) stare. Bellamy was always a very different character – much more publicly open – which means there are no revelations here, no fireworks. It’s a solid read though, leaving me with a sense that Bellamy viewed the sport as an all-consuming passion rather than something to be particularly enjoyed….can’t live with football, can’t live without it.

One other thing, upon signing for Manchester City in 2009 Bellamy said at the press conference

What was that I was saying about contradictions? LB 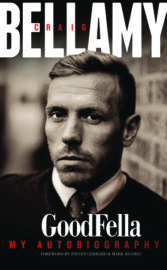