Last week was the tenth annivesary of the last time Wales played a full international at The Racecourse in Wrexham. Leon Barton recalls that game and considers the ground’s importance in the annals of the national team.

I turned 40 the other day and, as one tends to do when hitting such milestones, I’ve been reminiscing a bit of late. I’m also still hungover. I’m just getting that out there in case this article ends up a bit incoherent.

Mind you, it could also be a full-blown midlife crisis… I’ll keep you posted.

The last time Wales played at the World’s Greatest Football Stadium – The Racecourse / Y Cae Ras – I’d only just left my twenties. 6 February 2008 and Wrexham-born Jason Koumas inspired a 3-0 friendly shellacking of Norway. Ten long years ago. When I was young (okay, I’ll try and keep the midlife crisis to myself from now on).

The last competitive game played in the north (a 2-0 loss in a Euro 2000 qualifier versus Switzerland) was in 1999.

The last Racecourse World Cup qualifier (a 2-1 loss to The Netherlands) was in 1989.

And the last competitive international to have anything riding on it (a 1-1 draw with Czechoslovakia) was in 1987. 31 long years ago. The fact that Czechoslovakia doesn’t even exist now is an indication of how much time has since passed. The ‘Eastern Bloc’ was still a thing then. The last time Wales played a game that mattered in Wrexham the Berlin fucking Wall was still up.

Does it matter? Many would argue no. After all, Euro 2016 and the highest high in Welsh football history is still fresh in all our minds. It’s not as if not playing in the north of Wales has hindered us at all in the past few years is it? Plenty of Gogs were in France; and thousands of them are in Cardiff for home games too.

But it matters to me.

I don’t think it’s too much of an exaggeration to say that going to Y Cae Ras for the very first time changed my life. Wales versus Spain, 30 April 1985. I’d been to see Shrewsbury Town at Gay Meadow a few times before that but this is the first football game I can really recall in any detail. Atmosphere, noise, passion, colour and truly memorable goals. Mark Hughes’ spectacular scissor kick to put Wales 2-0 up being the most vivid moment of course, although what also sticks in my mind is the nonchalant way Ian Rush wrapped up the 3-0 victory (incidentally, this remained Spain’s biggest competitive defeat until the 2013 Confederations Cup final).

That was the night the impressionable 7 year old me truly fell in love with the beautiful game.

Although Wrexham-born, by the mid-80s my Lancastrian dad and Liverpudlian mum had found a new home, just over the border in Shropshire. It was going to Wales games that instilled a sense in me that I was in some small way Welsh. My dad would never had taken me to Cardiff for matches, whereas The Racecourse was just a 25 minute drive from our house.

It’s a horrifying thought, and I really do hate to say it, but I have to admit that had Wales never played in Wrexham during my childhood, I might well have grown up to be an England fan (bleuuurrghhh… I’ve just been sick. Sorry about your shoes). How many border boys and girls like me – the loyal fans of the future – are being lost now? Potential players too.

Gary Speed had English parents but talked about how attending internationals in Wrexham fostered his sense of Welshness when it came to football. It probably also helped that 1980s Wales were being skippered by a fellow Evertonian from the same Deeside village.

“We all enjoy playing at The Racecourse. There’s a terrific atmosphere for a big match. No disrespect to Cardiff but the atmosphere is better here than at Ninian Park”

North Wales bias from the Mancot man? Perhaps, but back in the mid 70s the hwntws in the Wales team – John Toshack, Terry Yorath, Brian Flynn – loved playing in Wrexham too. And not just for the big match atmosphere. In my book Little Wonder, the story of his contribution to Welsh football, published by St Davids Press and available from their website, Amazon and all good book shops, Flynn says:

“The Bryn Howel hotel was a great little set up by the canal in Llangollen. The tradition was: get there early, go for a few pints at The Sun Inn in Trevor, then walk back along the canal. All of us. We did it every time”

Although the idea of drinking sessions as a bonding exercise has fallen by the wayside, Flynn is at pains to point out that back in the 1970s it didn’t do Wales much harm; “Just look at the results we got in Wrexham”. He’s right. The diminutive midfielder came onto the scene just as what could be described as the ‘golden age of Wales games at The Racecourse’ was about to begin.

The era kicked off with the famous 1-0 victory over Austria in 1975, which saw Wales became the only British Isles nation to reach the last 8 of the European Championships. Local hero Arfon Griffiths scored the goal, former Wrexham favorites Joey Jones (then of Liverpool) and Dave Smallman (then of Everton) were in the starting line up, and the club’s goalkeeper Brian Lloyd not only debuted between the sticks, but he also designed the now-iconic programme cover (Lloyd went on to become an award winning architect following the end of his playing days). There’s probably never been a more ‘Wrexham‘ Wales game.

Five years later, Holywell native Mike England took over the team following Mike Smith’s departure to Hull City. It was a dream start for the new boss: Wales 4 England 1 on a beautiful May Day in north east Wales and a record win over the big boys from across the border. Another ex-Wrexham favourite – Mickey Thomas – scored the first of the four. 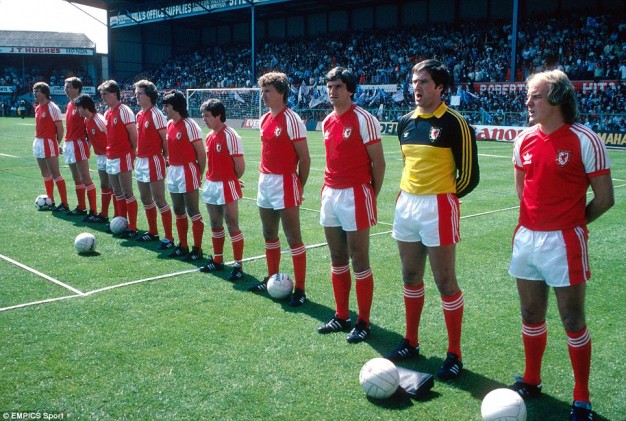 This golden period of Racecourse internationals lasted roughly twelve years. Wales were unable to win in Denmark and Czechoslovakia in the autumn of 1987, resulting in failure to qualify for the 1988 European Championship and Mike England’s sacking. England described the venue as his “lucky ground”. Understandable, considering Wales didn’t lose a competive game in Wrexham during his seven year reign.

The advent of the Terry Yorath era brought about a change of heart from the Welsh Rugby Union in regards to using their National Stadium in the capital. Big crowds and good results lead to the players and fans immediately feeling at home in the centre of Cardiff. Friendly fixtures were still played sporadically in the north during the 1990s, even if the pitch on a wintry February night in 1991 was more suited to ice hockey. The Republic of Ireland’s long ball tactics under Jack Charlton were less affected by the adverse conditions, with the visitors winning the game 3-0.

Perhaps the low attendance for the (as of 2018) final competitive game played in Wrexham has had a bearing on the FAW’s thinking on such matters. Only 5,000 were present for the match versus Switzerland in 1999. Poor, yes, but there were mitigating circumstances: it was a dead rubber; tickets were stupidly expensive at 25 quid a pop; and the team’s undoubted star turn Ryan Giggs was injured. Certainly, the contrast with the attendances Cardiff’s new Millennium Stadium over the following years was stark, with the Welsh public’s desire to see the team play in plush new surroundings bringing much-appreciated funds into the FAW accounts.

But some things in life are more important than money. The feeling across much of north is that Gogs generally get raw deal, and not just when it comes to football. The terrible transport infrastructure in Wales certainly isn’t the fault of the FAW but it doesn’t help matters. Wales is a fragmented place, getting around the country is difficult and time-consuming. But there’s been a sense over the past decade or so that the authorities have been wilfully complicit in what Red Dragons‘ author Phil Stead once referred to as “the ‘southification’ of Welsh football.”

It has resulted in some fans in the north beginning to feel disconnected from the national football team they grew up watching, despite the recent success of the side. Wrexham fan Ryan Jones is just one has found club over country feelings grow stronger in recent times despite the non-league fayre he watches on a regular basis being a world away from the dynamic performances we saw from Wales at Euro 2016.

When your own national team plays ALL their games several hours drive or train ride away, is it surprising that people might question the idea that the team is ‘theirs’? Go ask a Manc or Scouser what England means to them and you can expect short shrift from many. The worry is that such a situation could be allowed to develop in Wales too.

The FAW are regularly asked about the issue, and have been fobbing the fans off for years with excuses about “Wrexham needing to get back in the football league first’” Quite why that is a precondition for the financial injection needed to get The Racecourse up to the standard required to host internationals has never been properly explained.

Hope is on the horizon though. It was recently announced that the organization were looking at investing up to 4 million pounds to develop Wrexham’s former training ground Colliers Park, providing a northern equivalent to the impressive Dragon Park Centre in Newport. This is welcome news, but many of the club’s fans immediately responded by asking ‚yes, what about the ground?‘

Perhaps the ‘big game‘ ship has sailed forever with two fancy new football stadiums in the south and the general swelling of interest in Cardiff City and Swansea City going hand-in-hand with the successes of those two clubs sides. Attendances have been consistently excellent over the past four years for Wales games too.

Wrexham will never need a ground the size of the Cardiff City Stadium but Wales don’t always need one that size either. A 12,000 seater stadium in the north would surely be perfect for hosting games against the likes of recent opponents Panama, Georgia and Moldova. Talk is afoot that (at the moment still tentative) plans for a national football museum in Wrexham – the town where the FAW was founded in 1876 – could include development of the ground’s dilapidated Kop end. This would be even more welcome than the proposed development centre.

Giving Gog kids the chance to see their football heroes in the flesh on a regular basis is vitally important. The Racecourse matters. Let’s hope it gets sorted soon because I sincerely hope I don’t have to write this article again another decade down the line. Or worse, be too old and weak to type by some distant future point.