On the tenth anniversary of his international debut and with the prospect of gaining his 79th cap against Serbia and moving into outright third in Wales’s list of all-time most capped players – with only Gary Speed and Neville Southall ahead of him – Russell Todd compiles his Top 10 Chris Gunter moments.

10. Winning only his third cap as one of five under 21 players – three of whom were in goal and defence – in the daunting setting of the Frankfurt Stadion, Gunter put in an energetic performance against World Cup-bound Germany at left wing back in 2007. Displaying maturity beyond his years Gunter did not look at all phased. It bode well.

9. Having the previous month finally won for the first time under Gary Speed and put in a creditable performance at Wembley, Wales clicked and blew a talented and vaunted Switzerland side away in Swansea. Gunter put in probably his most potent attacking display in a Wales shirt to date – ever?- as he rampaged up and down the right flank like a Casnewydd Carlos Alberto. In a “breathless” five minute second half spell Gunter incited red card for a rash studs-high challenge and then won the penalty that set Wales on their way. Still not sure there was much contact though….

8. Twice playing centre half versus Belgium and putting in monumental performances. First in Brussels in 2013 when an injury-ravaged Wales ended the game with Jazz Richards, Chris Gunter, James Wilson and Neil Taylor in defence. Subsequently in Cardiff in 2015 when he joined Williams and Chester in a back three. Unusually Marc Wilmots deployed both of his heavy artillery units – Lukaku and Benteke – up front for the whole of the second half but they were kept extremely quiet. These performances were all the more surprising given the debacle that was Gunter’s centre back performance against Mexico early in Coleman’s reign.

7.  Another penalty earned but deserves to rank higher because it’s against Scotland. Watch the incident again and while you focus on Snodgrass’s reckless tackle it’s easy to overlook how overcooked Gunter’s cross is. No matter, he also played his part in the winner as Wales overturned a half-time 0-1 deficit and the loss of a sickly Bale. The Daily Record suggested that “against a Baleless Wales…international football doesn’t get much less challenging”. No, it doesn’t get much sweeter.

“I guess if you asked the lads in the squad, I’m not sure how many of them, if they weren’t playing would have been in the stands. I would have…I would go and watch Wales. I think it stemmed from that and perhaps knowing what fans are thinking.

“Going from Bordeaux, where the stadium was almost ours, to walking out for the England game and it was almost like an away game. That was something that probably wasn’t right because it’s meant to be equal.

5. Gunter’s appearance in Brussels was also notable for it being his 50th cap. At only 24 he became the youngest player to reach his golden Welsh cap. It’s hard to see that record being broken for a long, long time. Remarkably it is 54 games ago that Gunter last missed a Wales game.

An astonishing 54 games ago.

4. At the end of the 2013/14 season Wales were preparing, as they had for many a year, to be pre-tournament warm-up fodder for World Cup-bound countries. This time it was against The Netherlands in Amsterdam and Chris Coleman had an eye on new defensive personnel: James Chester was a surprise call-up for the first time; Paul Dummett made his international debut; and Declan John gained only his second cap off the bench. Coleman omitted Gunter under the impression that he was still recovering form a minor injury. Furthermore, after a long Championship season Coleman, who has always placed great emphasis on maintaining constructive relationships with club managers, did not see the need to risk a 50+ cap player who at that point had played in every game under him. Gunter promptly interrupted an interview to phone Coleman to tell him he was fit and would be joining up with the squad. If he was Dutch we would call that arrogance. Since he’s Welsh we’ll call it pashun.

2. The iconic, indelible image of Gunter telling The Red Wall in Lens to keep its chin up. He meant it reassuringly; it had the much greater effect of galvanising the support and was a critical factor in subsequently creating a deliriously wonderful summer. 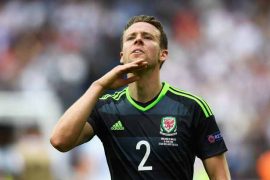 1. His first goal for Wales. In my mind I have re-created several times over (who hasn’t?) him creaming a 25 yard net-buster at the Cardiff City Stadium. Obviously when he finally scores for Wales it will probably ricochet in off his arse. It will cue pandemonium regardless.