Recently, Leon Barton looked at how the Euro 2016 qualifying campaign has brought redemption from Chris Coleman. In a guest blog, The Offside Rule podcast contributor Jamie Thomas also considers Coleman as he contrasts this week’s historic events in Zenica and Cardiff with the chastening events in Novi Sad three years earlier.

It’s September 12th 2012, Wales have just lost 6-1 to Serbia in Novi Sad the night before – a disaster, a huge blow, catastrophic, all the usual terms used to describe a heavy defeat are brandished by the big names in the media in criticism of Chris Coleman’s side.

The national squad hadn’t suffered a defeat that heavy since 1996, but that side in the nineties was a team in transition playing against a strong Netherlands side – this was supposed to be the Golden Generation of Wales, pushing on to reach the World Cup for only the second time in their history.

Instead, they were a team in limbo.

After the tragic passing of their previous manager Gary Speed, 10 months prior, everyone knew that it was going to take time to heal – you never forget something like that – that the excellent form the team had showed under Speed in his final five games in charge might not immediately be reflected in Chris Coleman’s first few games as Wales manager, but nobody expected this. Five defeats on the bounce, with performances gradually getting worse up until the point where Serbia swatted Wales aside with ease.

Chris Coleman had nowhere to hide.

Sat in the airport the day after the game on his own, he looked like the loneliest man in the world – externally finding solace by being away from the presence of others but internally he was frantic. Admitting recently that he considered quitting before he found new motivation from his friends and family, Coleman said he felt he has never felt like that before:

‘We didn’t just lose in Serbia, we embarrassed ourselves and when you do that you embarrass the country – and that’s another ball game. I’ve never felt that before.’

Fast forward to today, as I sit here three years later writing this on my journey home, and the boot is firmly on the other foot. Make no mistake, with Wales now having qualified for their first major finals since 1958 and their first ever European Championship tournament, Chris Coleman still has nowhere to hide from all of the attention that is being focuses on him – but this time it’s adulation that is being thrown his way, not criticism. A funny old game, isn’t it? But the turnaround is undoubtedly deserved!

You have to give immense credit to the man for, in the very spirit his team now embodies on the pitch, coming out swinging when his back couldn’t be any more pressed against the wall. For being adamant that his way was the right way, and ultimately being proven right by the way his team have performed in Euro 2016 qualifying.

This past week, he and his squad have seen the rewards of demonstrating that tremendous spirit as they changed the country’s sporting history.

Fitting as well that the crucial game, the 2-0 defeat to Bosnia on Saturday the 10th, should happen in Zenica – the closest Wales have ever been to Novi Sad since that fateful 6-1 thumping in 2012 – and fitting also that luck should go their way this time, to the point that the defeat didn’t matter because other teams had done them favours to ensure qualification for Wales a game early.

Gareth Bale called it the best defeat of his life. I think every single Wales fan would have to agree. Never had a defeat been so lauded by the fans. 800 roaring dragons penned in to a tiny corner of an old, wet stadium in Bosnia, with the total ecstasy that followed warming the souls of a nation.

But this was only the penultimate group game – there would be one more chance for Wales fans to watch their heroes in action three days later against Andorra in Cardiff. A meaningless game for the neutral, a total dead rubber, with Wales already certain of qualifying and Andorra already certain of maintaining their position at the foot of the group table.

But for the Wales fans, it would be an opportunity to wash away years and years of misery and near-misses with one evening of pure celebration.

An hour before the game, the stands were filling up, songs were being chanted, merchandise was being bought commemorating the occasion – 58 years is a long time to wait, or a lifetime for those of us not fortunate enough to be around in 1958, and the Welsh weren’t going to miss this opportunity to lap it all up and enjoy it.

Even the match itself was perfect. A lot of people around Cardiff afterwards or on social media in the days since have said it was a frustrating affair and Wales could have done better than they did, or at least scored sooner than Aaron Ramsey’s 55th minute opener, but from this fan’s perspective the performance was rather fitting. A metaphor, if you like, for Wales’ journey from that fateful night in Novi Sad to this epic occasion I witnessed before me in Cardiff that night.

It wasn’t pretty at times, Wales had to work hard, they were being frustrated by so many factors out of their control such as opposition injuries and negative tactics, they had to come up with a Plan B, but, more importantly they had to keep faith and believe in what they were doing and that it would work – it eventually did as Ramsey and Bale scored, and the likes of Ashley and Jonny Williams, Ben Davies put in a tremendous effort to give Wales that 2-0 win.

That is the story of Wales since that night in 2012. Nothing has come easy for them, it has all been hard work; spirited performance after spirited performance has seen them break all manner of records in the last few years and finally get this little nation of three million people noticed on the world footballing stage for the right reasons.

Not for missing out again, not for succumbing to a horrendous defeat, not for promising so much and delivering relatively little – people all over the footballing world are now talking about and looking at Wales and thinking ‘hey, these guys over here are pretty good.’

The big question is now – how do we build on that?

The European Championships will be key. Wales aren’t just going there to make up the numbers. They’ll obviously be going there to do well, to get out of their group and see where things take them. Can they achieve that? Absolutely. They’ve proved in this campaign that they can beat the best teams in the world – earning four points out of six against the now #1 ranked team – Belgium – is a clear indicator of that.

Will they achieve it? Who knows? But with the best fans in the world, one of the most tight-knit, talented group of players that Wales has ever had, and a manager who is as passionate and as well-regarded as Chris Coleman, Wales have as good a chance as anyone of doing the business out in France next summer! 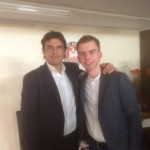 Jamie is a Masters student, studying media at Bangor University. He has written match reports and articles for Golwg, and has been commissioned by Y Lolfa to write a book about the Wales team’s journey to Euro 2016.