He has a now-legendary beard, Twitter accounts dedicated to him, his own fans’ song and is now an internet shape-thrower sensation. Russell Todd looks back at how, and when, Joe Ledley became a cult favourite among Wales fans.

Joe Ledley has long been a favourite of Cardiff City fans. A Fairwater lad and former Cantonian High School pupil, he has long epitomised the local-boy-done-good to the Bluebirds faithful. One of a clutch of Welsh players at Cardiff City in the early to mid 2000s – James Collins, Danny Gabbidon, Robert Earnshaw, Paul Parry, Rhys Weston, and, latterly, Aaron Ramsey and Chris Gunter – Ledley was unique in that he was the only one born and bred in the city. Given that Cardiff City’s fanbase is derived from a massive south Wales hinterland, this might be an insignificant thing to point out, but many of Cardiff’s idols are Cardiffians: Phil Dwyer, John Toshack, Fred Keenor, Stan Richards, Craig Bellamy. 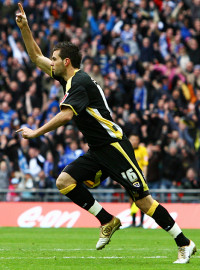 Working class football fans love a trier. Someone whose efforts, frustrations and occasional rewards – the odd flick, the last ditch tackle, the occasional through ball, the odd goal – mirrors their nine to five efforts. A player like Ledley who has, in footballing parlance, “a good engine” and selflessly played in almost every outfield position for Cardiff was giving, committed, dedicated and undemonstrative in his service to his, and their, club.

But what elevated Ledley, arguably, to the status of Dwyer et al was that he scored at Wembley. Twice. Local hero.

Before these feats however Ledley, who had been at Cardiff since the age of 9, had already racked up over 100 club appearances as a teenager – he went on to make over 250 in total – earned an FAW Club Player of the Year award in 2007 and won his first Wales caps (he made his début at 18 in Poland). Though his final season (2009/10) saw him lose his place in the first team and the captaincy, undergo hip surgery, face criticism from some in the club’s hierarchy and eventually leave on a free transfer, precious few begrudged his move to a club of the stature of Celtic. A further century-plus of appearances, three league titles, Champions League experience, an Old Firm winner and more cup final goals followed. If the standard of domestic football was not great, the massive and unrelenting expectation on Ledley as a player at an Old Firm club saw him mature, grow more resilient and become a winner.

Despite routine overtures from Stoke City, it was nonetheless a surprise when Ledley signed for a resurgent Crystal Palace under ex-Potters boss Tony Pulis, renowned for his admiration of effort and workrate among his players. Even more, when Pulis deployed Ledley in the hole behind a lone striker.

Parallel to much of this were regular Wales appearances. Despite a couple of competitive goals, his Wales career had been, it is fair to say, steady but unspectacular; although Ledley, at 22, did captain Wales’s youngest ever team against Estonia and again the following week in Baku in a 1-0 win over Azerbaijan. Part of John Toshack and Brian Flynn’s youth revolution, Ledley did not attract the headlines in the same manner as Gareth Bale, Jack Collison or Aaron Ramsey but slowly accrued caps. However, under Gary Speed and at the start of Chris Coleman’s reign, he started only four of 15 internationals with David Edwards, David Vaughan and Andrew Crofts tending to be preferred to complement Ramsey and Joe Allen. Indeed, Ledley did not feature at all in Speed’s trio of victories over Switzerland, Bulgaria and Norway that suggested a corner had finally been turned. His first start under Coleman was not until Scotland at home where he galvanised a midfield that Scotland, marshalled with simmering fury by Scott Brown, had set out to bully, with particular boorish attention paid to Gareth Bale.

Defeat in Croatia followed, but with Aaron Ramsey unavailable and Craig Bellamy and Gareth Bale withdrawn at half time and on the hour respectively, Ledley bossed the second half of the friendly against Austria in Swansea. In demanding the ball in a manner reminiscent of Gary Speed and driving and cajoling his team-mates on Ledley had, it occurred to me at least, an on-field stature and presence that I hadn’t noticed previously.

Whereas before, his game was about workrate and being a foil allowing for more able comrades to flourish, Ledley was the heartbeat of the side that night. Starting twelve of the nineteen internationals since (up to Andorra at home), Ledley has established himself as first choice partner to Allen and Ramsey, at least in a 3-5-2 formation. When I have referred to him as the team’s enforcer, it has occasionally been met with disdain; it is not intended as a veiled criticism. Neither is it meant to bracket him with uncultured, thuggish Vinny Jones types. Ledley can play. But there is now a steely resolve to Wales. Joe Allen and Aaron Ramsey have shown themselves to be fearless in their appetite for the ball and to shoulder creative and tempo-setting responsibility; the Jameses, Collins and Chester, look like they can handle themselves in the heat of the battle; Ashley Williams being called a ‘warrior’ is now as clichéd as it is patently true; and Gareth Bale is obviously the totem, for this side – this generation – showing enormous mental (and no little physical) resilience in this campaign.

For me though it is Ledley that personifies the increased resilience of the side. Although he talked his way into the referee’s book early on at home to Cyprus in 2014, he did so demonstrating that a team that received little protection in the preceding game against Bosnia was not going to take a backward step. Another booking followed in Brussels for a leading arm in an aerial challenge that floored Belgium’s midfield then-enforcer Axel Witsel. Sometimes football can’t be the beautiful game. Perhaps I’m at risk of over-stating matters when I see him as a paternal figure to this side. Only James Collins and David Vaughan in the current set-up were capped before him; only the cap-machine that is Chris Gunter has won more than Ledley’s 58 caps.

Perhaps, of course, Ledley is playing no differently to how he always has; perhaps he is no more resilient now than he was as an energetic teenager for Cardiff; perhaps he has always had stature and presence. Perhaps I just notice him more now due to his beard. 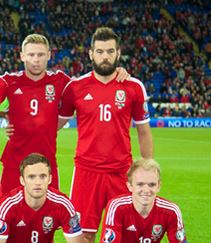 It first appeared in a Welsh shirt as a work-in-progress in Andorra-la-Vella, but had achieved an hirsute maturity at home to Bosnia the following month. It has now achieved cult-hood itself. For some, an outrageous hair cut or facial adornment can actually compensate for shortcomings elsewhere. Think Sebastien Chabal, if you can pardon the change of code for a moment. His Gallic caveman look was a phenomenon for a short while in the late 2000s but actually distracted from his being a decent, but no means great, number 8 and a distinctly average lock forward on the international stage. Our caveman, our Sasquatch (© @adecolley), though not our most gifted player, is an integral part of matters and is clearly a key factor in the amazing team spirit that this squad has. As demonstrated by Ramsey’s bee-line to the Wales bench to celebrate his goal with Ledley last night; as demonstrated by how Ledley ended up a prominent figure last night and didn’t even play! As Ian Rush said in his post-match punditry:

And boy, isn’t everyone going?