Guest blog / Blognod gwadd: How have the Wales squad performed this season?

In this guest blog Iolo Cheung takes a statistical look at the form of the 30 players vying for a place on the plane to France.

Next week will be Wales manager Chris Coleman’s last chance to have a look at his squad before choosing the chosen ones who’ll travel to Euro 2016 in June.

Following a week of warm weather training in Portugal, the 29 players will return to Wales where the number (plus Gareth Bale) will be whittled down to the final 23 who will go to France.

The manager has already suggested that he more or less knows who will be selected, but the speculation has continued among the pundits and fans.

And while we await Coleman’s announcement, we’ve been doing a bit of number crunching ourselves in order to pick out a few of the notable facts and figures about the players.

Who’s been performing well this year? Which players have disappointed? Where will our goals come from? Who’s had a long season of games, and which ones will be fresh for tournament football?

A quick look at the players’ performances for their clubs this season throws up a few wholly unsurprising results – namely that star man Bale leads the way.

He tops the Squawka and WhoScored charts when it comes to points/marks per game for Real Madrid, and in fact he seems to have been both literally and figuratively heads and shoulders above the rest this year.

On the other hand Neil Taylor, James Chester and Wayne Hennessey have had seemingly unimpressive seasons (we’ll excuse Danny Ward for having made only two EPL appearances) and the same can be said of Adam Matthews and Adam Henley in the second tier. 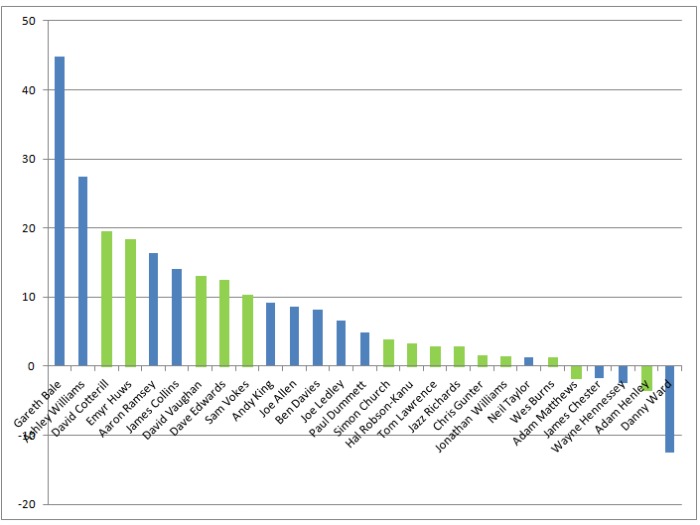 WhoScored’s ranking of Wales players’ club performances this season don’t seem to be dramatically different either (it’s worth noting that they use a more traditional ‘points out of 10’ system as opposed to Squawka’s positive/negative points method).

Nine of the players make the top ten of both charts, and the variation seems to be more pronounced at the lower end.

Simon Church, Jonny Williams, Wes Burns, Joe Ledley and Hennessey score the lowest with WhoScored, with the Palace keeper also collecting the dubious honour of being the only player in the bottom five of both lists. 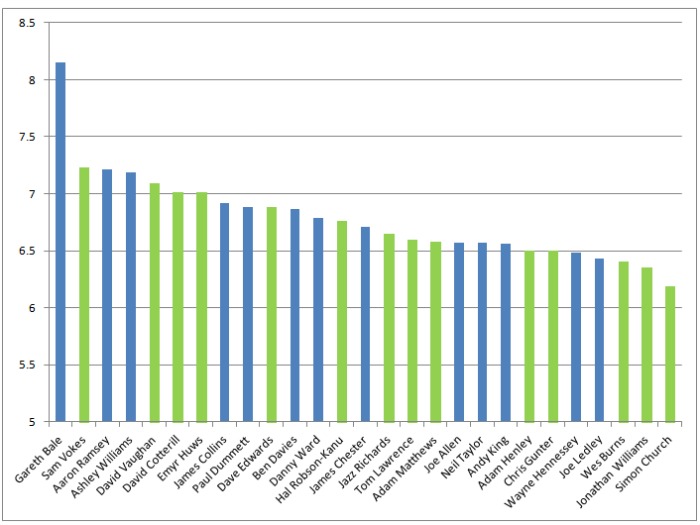 One thing to bear in mind is that these marks are based on the players’ league performances only (plus European competitions for a handful) – the eagle eyed among you will also spot that they’re colour-coded blue and green to differentiate between Premier League and Championship players.

Owain Fôn Williams, George Williams and Tom Bradshaw also don’t appear in the charts, as the statistical boffins don’t seem to be keeping such detailed stats on the SPL and League One.

The question is – to what extent is Coleman considering the players’ performances at club level when considering his squad?

And, among the other possible talking points, are there any suggestions from the stats as to who may be best placed to step in to Ledley’s midfield role should the bearded battler fail to recover from injury in time?

The only stat that really counts, as the old adage goes, is the number in the ‘goals’ column – and it is no surprise that Bale leads the way again in this regard having found the onion bag 21 times this season for club and country.

Walsall’s Tom Bradshaw, a striker many would like to see included in the final squad, follows hot on his heels with 20 goals, Sam Vokes (16) and Church (10) have also reached double figures this year.

Bale also leads the assist charts with 14, while Cotterill and Robson-Kanu’s contributions from out wide for their respective Championship clubs have seen them notch seven each, and Vokes and Aaron Ramsey have contributed five each.

It means that over the course of the season Bale has scored or assisted every 75 minutes he’s spent on the pitch, a remarkable rate at any level.

Church sneaks into second place, scoring or creating a goal every 159 minutes, while Bradshaw, Burns, Vokes, Cotterill and Robson-Kanu also score highly on this measure by virtue of being attacking players.

Interestingly Joe Allen appears to have a better rate than Ramsey – could he thrive in a more attacking role for Wales? – while Tom Lawrence’s goals and assist rate (once every 435 minutes) leaves much to be desired compared to his fellow forwards.

A common concern raised on the eve of international tournaments is often the long domestic season that’s just come to a close – are players arriving at the championships fatigued?

Many of our players play in the Championship, a demanding league of 46 games, while many of those in the Premier League have had to accommodate domestic or European cup competitions into their schedules.

The graph below would certainly suggest that Chris Gunter is deserving of a break before the Euros – he has already played 59 games this season, with another appearance likely in the Sweden friendly in just over a fortnight, and he’s already clocked up over 5,000 minutes on the pitch. 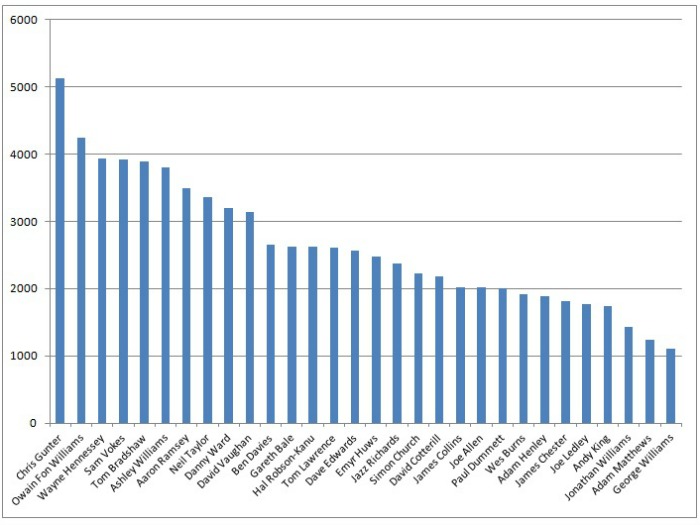 It’s no surprise to see that goalkeepers Hennessey and Owain Fôn Williams are next on the list, while Ashley Williams and Neil Taylor also look like they’ve deserved the rest at Swansea over the last few weeks.

At the other end of the graph, injuries and struggles to establish themselves at their parent and loan clubs have limited the game time of George Williams, Jonny Williams and Adam Matthews.

Another interesting point to note is that a number of our Premier League players, notably midfielders Andy King and Joe Ledley, are also quite low on the graph of minutes played.

The flip side is that it does mean that they’re likely to be fresher for France of course (that is, unless they’re currently injured, as is the case with Ledley).

Having said that, Gunter insisted in a recent interview with Golwg that he’s used to playing over 50 games a season by now, and that fatigue will understandably be the last thing on the Wales players’ minds at the Euros.

One thing’s for certain – the squad and the fans will certainly be more than happy if they face another whole month of football ahead of them this summer!

Iolo Cheung is a reporter who covers the Welsh national team for Golwg and Golwg360. This article first appeared here in Welsh. You can also follow Iolo on Twitter at @iolocheung