Having previously featured guest blogs selecting all-time Preston North End and Ipswich Town Welsh XIs, it’s now Richard Taylor‘s turn, whose research took him deep into the annals of the history of Sheffield Wednesday FC, mainly due to the fact that less than thirty Welshmen have pulled on the blue and white stripes during the club’s entire 151-year existence.

There has always been a local flavour to the club. It was formed in 1867 by a band of workers as an offshoot to an already established cricket team that competed on Wednesday afternoons. The football club would soon surpass its cricketing counterpart and become ingrained in the heritage of British football. Despite its lengthy tenure in the domestic system, however, the Welshmen passing through the club have been few and far between.

Here is Richard’s all-time Welsh Wednesday line-up. For this, I have been forced into a 3-5-2 formation: 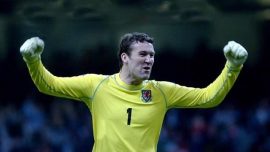 MARK CROSSLEY
The Barnsley-born shot-stopper joined the Owls on loan from Fulham in the 2006/2007 season. Qualifying for Wales through the grandparents rule, ‘Big Norm’ made 8 appearances for Wales including the 4-0 win over Scotland in Cardiff. Crossley was the first signing by manager Brian Laws at Wednesday and became a cult hero with fans after popping up to head home a stoppage-time equaliser in a 3-3 draw with Southampton at Hillsborough, the only goal of his professional career.

PETER RODRIGUES
Cardiff-born Rodrigues played for Wednesday for five seasons, having joined as a right-back from Leicester City in 1970. He went on to make 162 appearances for the Owls in a career that also saw him win 40 caps for his country. This was a bit of a dark period for Wednesday who, having been relegated from Division One in 1970, were struggling to maintain their Division Two status. This culminated in relegation to Division 3 in 1976, by which point Rodrigues was lifting the FA Cup as captain of Southampton, having been released by the Owls the previous season. He will primarily be remembered by Wednesday fans for scoring a 40 yard screamer against Fulham to stave off relegation in 1974 and, more bizarrely, an on-pitch snowball fight in an abandoned game against Bristol City at Hillsborough. 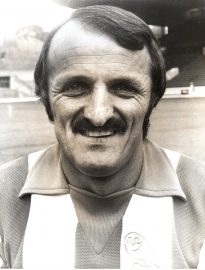 DOUGLAS WITCOMB
Ebbw Vale-born Witcomb amassed 224 appearances for the Owls between 1947 and 1953. A classy left back, he had previously captained West Bromwich Albion before moving to Hillsborough after the war. Witcomb also captained Wales during the war years in several unrecorded friendlies, before winning 3 official caps in the 1946-47 Home Nations tournament. Witcomb scored 12 goals for Wednesday in all, including the opener in a 2-1 victory over Cardiff City in 1947 to take Wednesday into the top half of the table.

HARRY HANFORD
This one was a surprising find for me. Being a Port Talbot boy, I was never aware that a fellow son of the town had ever turned out for the Owls but Hanford appeared as a welcome exception and, for that reason, I have to include him in the all-time list. He deserves it too, having made 88 appearances for Wednesday between 1935 and 1939. The Blaengwynfi-born centre back had previously reached the 200-game milestone for Swansea Town before moving to Hillsborough. He also turned out for Ton Pentre and Haverfordwest Athletic during a career that spanned nearly 30 years in the game, and he won 7 caps for Wales. His only goal in Wednesday colours came in a 2-1 defeat to Plymouth Argyle in the 1938-39 season when Wednesday finished a respectable third in Division Two.

MARK PEMBRIDGE
In my opinion, Pembridge was one of the most underrated players to have pulled on the Welsh shirt. His workrate and endeavour was a rare positive commodity in a Welsh team that was often blighted by injuries and withdrawals. Pembridge made 108 appearances for Wednesday after being signed by David Pleat for £900,000 from Derby County in 1995. A trawl of the Wednesday and Wales forums will give you an idea of how his style of play divided opinion among the fans but, for me, I felt that he made an invaluable contribution for Wednesday. He was also capable of a super strike, epitomised by a thirty yard screamer he buried away to Chelsea at Stamford Bridge in 1996 which has lived long in the memory.

BARRY HORNE
I might be making this selection through rose-tinted spectacles as Horne was a real leader on the pitch for Wales. Peter Shreeves signed him towards the end of Wednesday’s relegation season from the Premiership. Times were getting bleaker and it would have been fitting for a Welsh legend to come in and save the day. He made just the 7 appearances for the Owls and added some much-needed steel to a weakened midfield that included a heavily-past-it Wim Jonk, but he was in the twilight of his career and not even his never-say-die attitude could save us from the drop. We haven’t been back in the top flight since.

RYAN JONES
Jones had just forced himself into a strong Sheffield Wednesday side in the mid 90s and won his first cap for Wales in a 2-1 win away to Estonia before a knee injury forced him out for the season. Despite a few attempted comebacks he eventually left Wednesday and played a handful of games for Scunthorpe before being forced to retire aged just 25. Jones was a tough-tackling midfielder with a great left foot; he scored 6 goals in just 41 appearances for the Owls and was set to have a big future on the international stage for Wales. 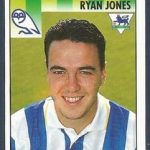 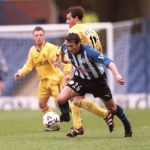 CARL ROBINSON
Currently managing Vancouver Whitecaps, Robinson took in Sheffield Wednesday as one of his many loan-deal forays away from his parent club Portsmouth. He played just four games for the Owls in 2003, scoring one goal against Norwich City, in a largely forgettable spell at Hillsborough. I have included him in the all-time XI, however, for his international credentials as a half-centurion and the goal that put us 2-0 up against Northern Ireland at Windsor Park in 2005, a game we eventually won 3-2.

RICHARD EVANS
Evans was signed as a tricky right winger from Birmingham in 2003 by Chris Turner. These were among the darkest days for Wednesday fans and, despite playing only ten games for the Owls, Evans was received well by the Hillsborough faithful. He scored his only goal in a 7-2 victory against Burnley, by which time we had already suffered our second relegation in 3 years. Evans eventually dropped down the divisions and went on to appear for Port Talbot Town and Aberaman Athletic in the Welsh Leagues. Evans was tipped for a big future with the Owls having signed as a rising star from the youth divisions and, in my opinion, was unlucky not to have been given more of a chance in a team that badly needed an injection of youth and energy.

TOMMY JONES
Tonypandy-born Jones played 29 times over five years for Wednesday scoring six goals before being signed by Manchester United in 1934. He was snapped up by the Owls after several successful seasons at Tranmere Rovers but largely failed to oust Wednesday’s number one striker Mark Hooper during his time at the club. His time in Sheffield, however, earned him international honours as he won two caps against Ireland and France respectively.

REES WILLIAMS
Rees has recently been the subject of a campaign by a group of Merthyr fans who successfully raised funds to pay for a headstone for the former Welsh striker. Williams was part of the Championship winning Wednesday side of 1925/26, playing a crucial role in the outside right position to earn the Owls the title. He played 140 times for Wednesday scoring 9 goals before earning a big move to Manchester United. He also turned out eight times for his country, scoring twice. A son of Merthyr, he will soon be given a fitting memorial by fans of his hometown club to commemorate his contribution to his sport.

GK – LEWIS PRICE
Price was set to become a big star for Wales when he broke into the Ipswich Town team in 2004, eventually making his international bow a year later against Cyprus. Having lost his place at Portman Road, however, things never worked out for the shot-stopper after that point. He came to Wednesday in 2015 but only managed five appearances as Keiren Westwood maintained the number one jersey. Wednesday finished 6th that season, our highest position in 16 years. Price sat on the bench for the majority of it.

DF – ASHLEY BAKER
Bridgend-born right-back Baker has just broken into the Wednesday first team and looks to have a bright future ahead. Having signed from Cardiff City’s youth system, Baker is currently competing for the right back spot with Scottish international Liam Palmer and, if rumours are to be believed, is on the radar of Welsh manager Ryan Giggs for a future call-up (although who would ever drop Chris Gunter?). Watch this space on this young lad. He’s capable of delivering a cross and he’s a defender with a lot of pace and potential.

DF – MORGAN FOX
Fox was signed by Carlos Carvalhal for Wednesday as cover for Daniel Pudil. With Pudil moving to a more central role, this was set to be ths year that he cemented the left back spot as his own. Things haven’t worked out quite according to plan, however, and Fox has struggled to make the step up but time is on his side and he is capable of breaking into the first team, having shown flashes of talent. He has also tasted international football having been called up to a few of Coleman’s squads in the run-up to Euro 2016.

MF – LLOYD ISGROVE
Isgrove joined Wednesday on loan from Southampton in 2015 and made a positive impression on the right wing in his eight appearances. Having left Wednesday he joined our rivals Barnsley on loan before making his move permanently in 2017. He made his international debut in the Euro2016 warm-up friendly against Northern Ireland.

DF – RYAN GREEN
Green found fame early in his career surpassing Giggs’ record as the youngest ever played to be capped for Wales. He was one of Chris Turner’s less than spectacular permanent signings in our relegation season of 2002/03, making only four appearances before being released at the end of the campaign.

DF – PETER GILBERT
Gilbert was the only Welsh player to sign under the management of Paul Sturrock, who originally took the left back on loan from Leicester before making his move a permanent one. He made only 41 appearances in 4 years, failing to oust firstly John Hills and then Tommy Spurr to the left back position. Gilbert was also unlucky with injury during his time at Hillsborough.

DF – RHOYS WIGGINS
Another left-back who skirted around the fringes of the Welsh squad and was seen as one of Carvalhal’s promising young signings. It never came off for Wiggins at Hillsborough, however, and he only managed the six appearances in a Wednesday shirt before joining Bournemouth. Wiggins won 10 caps for the under 21s and has twice been called up by the senior squad but has yet to win a cap.