Thanks for the memories, Robert Earnshaw

Last month Robert Earnshaw announced his retirement from international football having won 59 caps for Wales since his memorable debut against Germany in a pre-2002 World Cup warm up game at the Millennium Stadium. Russell Todd looks back at his Wales career

I confess that my first thought on hearing the news was that it had a smack of desperation and vanity; Earnshaw had not figured for Wales in almost three years since a late substitute appearance against Bosnia Herzegovina in Llanelli in August 2012 after a dismal season in his second spell at Cardiff City. In those three years his career was listing, as he found himself criss-crossing the Atlantic looking for regular football: spells in Israel, the United States, Canada, the car crash that has been Blackpool and finally back to Canada, where he currently plays for Vancouver Whitecaps.

But his heartfelt statement made me reconsider:

“I fell in love with football ever since I was a kid and went to my first Wales game, It has been a dream come true to have the opportunity to walk out in front of the whole nation and represent Wales in so many important games. I am honoured and proud to play for my country for over a decade. I am also extremely thankful for the support I’ve received over the years from all my Welsh teammates, coaches, and staff and will be forever grateful because I know I’ve been in a position that millions dream of. I gave it my all in every minute and shared all the jubilations of scoring goals with the people of Wales. The pleasure has truly been all mine.”

Just compare this with the manner in which many others brought the curtain, if only temporarily in some cases, down on their international careers. The likes of Paul Parry, Danny Gabbidon, Danny Collins, Boaz Myhill, Robbie Savage and others.

Arguably, Earnshaw had more grounds than most to be frustrated and disappointed at the way his international career had gone. After labouring his way to a golden cap against Luxembourg in August 2010 Earnshaw’s final caps were bit-part substitute appearances or starting in largely scratch teams in the short-lived Nations Cup. Though in the 2011 match against Scotland he did captain Wales for the only occasion, it was only the third time in the last eight years he had completed 90 minutes for Wales since San Marino in Serraville 2007. In this time the likes of Jermaine Easter, Freddy Eastwood, Steve Morison, Simon Church, Craig Davies, Ched Evans and Sam Vokes were all winning caps. These muster only 12 international goals between them compared to Earnshaw’s 16, which sees him tied sixth on the all-time list of record goalscorers alongside legends Cliff Jones, Mark Hughes and Gareth Bale. He was finding himself regularly being overlooked for squads or being left on the bench by both Gary Speed and John Toshack. Yet after 17 caps he had 9 international goals. There was talk of him, even as late as 2006, having Ian Rush’s all-time goalscoring record in his sights. He has scored over 200 career goals in total.

So is Earnshaw’s Wales career a bit of a letdown?

If it is, in truth it is little of Earnshaw’s doing. The trend for lone or even inverted strikers in international football had a sobering effect on his Wales career. Those early caps and goals largely came in the classic little ‘un, big ‘un combination alongside John Hartson whose robustness as target man was the perfect foil for Earnshaw’s instinctive sniff of goal and lightning reflexes. Lest we forget in 2004 he single-handedly routed the Scots, against whom a quarter of his total international goals were scored, and went a small way to compensating for the injustices 1977 and 1985. Earnshaw then transferred to the English Premier League and his career seemed very much in the ascendancy. By this point however Hughes had already, infamously, chosen to ignore Earnshaw’s threat from the start in the 2003 play-off second leg against Russia. As he had against Serbia and Montenegro in August 2003, the rearranged game where the wheels began to fall off the Euro 2004 qualification campaign. The ineffective Nathan Blake was chosen ahead of Earnshaw who did not enter the fray until the 77th minute. Within three minutes he had almost scored having rounded the keeper but scuffing his nonetheless goal-bound shot that Mladen Krstajic lunged to clear. The first significant ‘What if’ moment of Earnshaw’s international career?

Against Russia Hughes remained conservative in his selection and though he gave Earnshaw a bit more time than in Belgrade, pressing him into action on the hour mark, he played on the right wing where he failed to make an impact. What if, again, he had started and been able to provide a lethargic and heavy-legged Welsh performance with energy and fizz?

By now an EPL player, it arguably had little effect on polishing the rough edges to Earnshaw’s game. His hold-up play remained poor and his first touch inconsistent, although he arguably kept West Brom in the EPL in 2005, notching a hat-trick in doing so to complete the remarkable feat that is the subject of that quiz question. By January 2006 though Earnshaw found himself back in the Championship. John Toshack also appeared to have little trust in Earnshaw’s tactical awareness and adaptability. Earnshaw lacked the touch to successfully play the lone striker and with his game not being enhanced by his domestic coaches, in the early days of his reign Toshack preferred to partner Ryan Giggs and Craig Bellamy upfront. Then he adopted a more cautious tactical approach usually with only a lone striker and began blooding youth by selecting teenagers such as Evans, Vokes or Church as the lone striker.

Though Earnshaw continued to win caps the goals were drying up. Furthermore, the goals he did score mattered little. Earnshaw only scored two competitive goals under Toshack, the second in a 3-1 home win over Cyprus and the first in a narrow 2-1 win in San Marino. He was not winning games for Wales, or turning them, or even saving them; neither was he scoring against the bigger nations or in the must-win games. Indeed, even when Wales were chasing games against these countries – Russia, Germany, England, Czech Republic – Earnshaw, by now moving between a succession of Championship clubs, was often left on the bench. 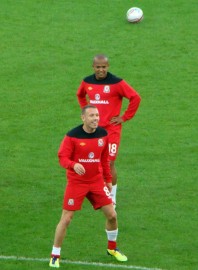 He did score another five goals for Wales but these were all in end of season friendlies: a brace against Trinidad and Tobago in 2006, a penalty against Estonia in 2009 and the Nations Cup goals against Scotland and Northern Ireland in 2011, by which time Gary Speed was now manager. Earnshaw revelled in scoring them with his trademark somersault still being employed, but they were low-key goals, in low-key games, alongside some low-key players (Andy Dorman or Glyn Garner anyone?), in half empty stadia.

Speed was far less cautious than Toshack. Reverting to a flat back four, Speed was looking to select more pace and offensive flair and selected Earnshaw in his first game in charge against the Republic of Ireland in the Nations Cup, but soon he was vying with Steve Morison and Hal Robson-Kanu to partner Craig Bellamy up front. Both these players offered the very qualities Earnshaw lacked: Morison offered strength and presence and Robson-Kanu offered versatility and adaptability to play wide, in the inside left channel or on the odd occasion up front. Ironically, neither, of course, will get anywhere near Earnshaw’s career goals tally, even jointly. So once again Earnshaw found himself not fitting-in and on the periphery. Yet his enthusiasm and infectious smile remained undimmed. His commitment to the cause remained strong, as it had when a succession of players spurned the opportunity to represent Wales, opting instead to ‘retire’.

But there was to be one final moment. Not so much of redemption, for there was little Earnshaw had done to require redeeming: Hughes’s conservatism was not his fault; neither was inadequate coaching by a succession of poor quality, domestic British managers; nor that the fashion for lone strikers at international level had little demand for the qualities that Earnshaw possessed. But it was a moment of vindication. Vindication for the airmiles he was racking up travelling from Israel and North America to join up with squads and not be called upon; for his unparalleled commitment to and enthusiasm for Wales during the 2000s; for the opportunity to prove that his fox-in-the-box, poacher skills were still of value. Yet when it presented itself in the 76th minute against England at Wembley Earnshaw failed to seize that moment. Like he failed to against Serbia and Montenegro and like he was, arguably, hindered from doing against Russia. The 2002 vintage Earnshaw would have instinctively buried that tap-in. Instead the 2011 blazed it over the bar, way over in fact. Earnshaw’s potency in the opposition box had gone and without it he offered, frankly, little to the national team. He played in the Gary Speed memorial match against Costa Rica; I have absolutely no doubt he would have moved mountains in order to. And he had those final couple of minutes against Bosnia but it was as sad and limp an end to his international career as it was an explosive, memorable commencement to it.

Should Earnshaw’s Wales career have achieved more? Probably. But 59 caps, 16 goals is still a very respectable return indeed, seeing him rub shoulders with some of Wales’s true greats. It is testament to his early promise that despite such a return there remains a degree of disappointment about his international career. But for his commitment, infectious enthusiasm and the heady days of his early caps alone he probably deserved a better send off. A substitute appearance at the Cardiff City Stadium would have been fitting. But seldom can such moments be stage-managed with precision, as the likes of Ian Rush or Paul Jones will testify.

“The pleasure has truly been all mine”. No it hasn’t Robert, not at all. Thanks for some great memories and pob lwc for the remainder of your career with the Whitecaps and wherever else it may yet take you.