Get With The Programme

With the return of Welsh rugby’s Judgement Day to the Millennium Stadium this weekend, Podcast Pêl-droed contributor and Scarlets and Swansea City fan, Hywel Picken reminisces about the importance of programmes to his childhood match day experience, both rugby and football, domestic and international.

Those trips to Cardiff and the Arms Park, both rugby and football, during my formative years, are amongst some of my most valued memories, but how much can I really remember about the action and sequence of events in games that took place when I wasn’t even a teenager? What is it that helps keep these unique and special days at the forefront of my mind? 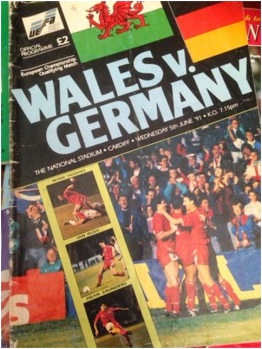 Can you remember when a match day programme resembled an encyclopaedia? A veritable treasure trove of information, vital for the improvement of the knowledge banks and literacy levels of the average fan.

My first Wales football match was our stunning victory over the then world champions Germany in 1991 (How lucky am I? Thanks, Dad). Ian Rush scored and ran over and celebrated right in front of us. I was 8 years old and a hugely significant sporting moment and memory had been indelibly inked into my memory forever.

That was not my first visit to the old Arms Park though. That had come a month earlier when I had witnessed an Ian Jones inspired Llanelli disdainfully dispatch Pontypool 24-9 to lift the Schweppes Cup. A year later I was there to watch Scott Quinnell run riot against Swansea as we successfully defended the trophy and then again in 1993, this time to see an Emyr Lewis drop goal win a hard fought game against a plucky Neath side.

The significance of these events ensured that I was hooked on sport. Welsh sport more precisely. I couldn’t get enough of it and this was well before the days of Google and 4G and every piece of information being readily available at your fingertips (although there was teletext, which was utterly magnificent). How did I extend and hone my sporting knowledge? How would I ensure that when my team took to the field that I knew all about them, including height, weight, total transfer fees and place of birth?

Beautiful, glorious, information packed programmes. Knowledge is power and never more so than on a playground where knowing the precise location of David Phillip’s birth (West Germany – not that precise looking at it now) was considered hugely impressive.

I think the first book that I chose to read was Matilda by Roald Dahl. I know my first programme was the Llanelli v Pontypool cup final programme of 1991. I read it cover to cover, time and time again. Lawrence Delaney was a welder (what’s that Dad?), Colin Stephens was an Area Representative (what’s that Dad? Answer unrepeatable), Tony Copsey was born in Romford (where the hell was that and how did he end up in Llanelli?) and Rupert Moon used to play for Abertillery (why did he play for them, Dad? They’re shite!).

The player profiles were my favourite parts. Not only were they informative, they were descriptive. This description of Barry Horne was taken from the World Cup 94 qualifying campaign and the game versus R.C.S:

“Began with Rhyl whilst taking a degree in Chemistry at Liverpool University (imagine a footballer bothering to do that now?). Made his breakthrough with Wrexham where he played in a European Cup Winners’ Cup run. His tigerish (brilliant!) qualities soon caught the attention of leading clubs, and transfers to Portsmouth and Southampton ensued. Joined Everton at the beginning of last season. Has played 38 times for Wales and scored 2 goals.”

In the same programme it states that:

Perhaps Bodin should have bloody stayed there…and that Mark Hughes’:

Programmes were not just pocket sized money spinners but lovingly prepared, fact filled, descriptive artefacts of wonder. A historian’s dream. The Llanelli versus Fiji programme from 1995 contains a three page, highly detailed match report by John Billot on our 31-28 victory over the South Sea Islanders on Guy Fawkes day in 1985. Here is a little taster;

“Jonathan Griffiths, the daredevil (my kind of player!) scrum half played the game of his life against the Fijians at Stradey Park as his club fought 25-0 arrears to snatch the most amazing victory in more than 100 years of Llanelli rugby history”

In the same report Griffiths is described as a ‘tormentor of imaginative invention’ and ‘a human dynamo’ while the 9,000 Turks watching meant that ‘Stradey buzzed like an overturned hive.’ I think it is fair to say that John Billot was a wordsmith and it is these descriptive, passionate accounts of past triumphs that made the programme an essential part of the match day experience.

The Llanelli versus Fiji programme from Tuesday November 7th 1995 (KO – 2.30pm – half day at school – result) is also remarkable as it contains an article by illustrious News at 10 anchorman Trevor McDonald who states that ‘Few requests have given me greater pleasure than to be asked to write something for Llanelli Rugby Football Club’s programme.’ Famous newsreaders certainly seem to have an affinity with the Scarlets. 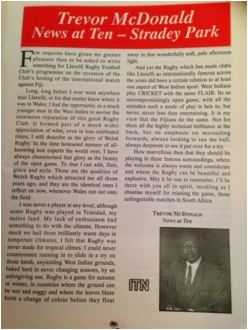 While the contemporary match-day programme is a far glossier affair than of old, often, particularly in the case of the Welsh international rugby programme, it is far more a case of style over substance (Cardiff City are a notable exception – the club kindly provided me, free of charge, with a large number of programmes to use with my students struggling with literacy and the quality and detail is excellent).

And to the Millennium Stadium we go. I look forward to getting a programme at Judgement Day. A far better accompaniment to, what will hopefully be, an entertaining and memorable event than an overpriced hot dog or a warm pint.