In part 1 of this blog Russell looked back at players who made goal scoring debuts for Wales. Players such as Mark Hughes, Robert Earnshaw, Nick Deacy of recent vintage; Tommy Bamford, Ernie Curtis, Robert Roberts and Les Boulter of yesteryear. Here are some more.

Ched Evans – before Ben Woodburn’s instant goal scoring impact against Austria, Evans was Wales’s last goal scoring debutant. His audacious backheel in Iceland – a country he admitted he didn’t know the location of – came immediately after he replaced Carl Fletcher, captaining Wales for the first time, as one of a trio of debutants in Reykjavik (with Sam Vokes and Jack Collison*).

Following a goal a game record in 13 Welsh under 21 caps, a taste of EPL action with Manchester City and a productive Championship loan spell with Norwich, his future looked bright. According to Leon Barton in his forthcoming  biography of Brian Flynn, Little Wonder, Flynn felt that Evans was similar in style to Alan Shearer and was “convinced” that he would take his chance in the EPL should he get one. Mark Hughes gave him several but a solitary EPL goal was all Evans mustered. Described by Bryn Law as “almost painfully unintelligent” Evans’s promising future has not been realised, as everyone reading this will be fully aware. His return to the Wales squad would polarise opinion and Chris Coleman has been coy about it. But with only seven league one goals in the 14 months since he returned to professional football, the argument seems academic at present.

*Joe Jacobson was also called up for this match, but never called upon

Dai Collier – in the 1920s Aberdare and Merthyr Tydfil had Football League clubs alongside the ‘traditional’ four Welsh clubs. When the Southern League was restructured into a third division of the Football League in 1920 Mid Rhondda FC, based in Tonypandy, were unlucky not to be admitted. One of south Wales’s most successful post-First World War clubs ‘The Mush’, as they were known, were managed by ex-Wales international Haydn Price and had grand plans, galvanised by signing the precociously talented young Englishman Jimmy Seed. Seed eventually left for £1,000 to join Spurs and went on to win international honours. Local lad Dai Collier was another notable talent but, along with Price, departed for Grimsby Town in 1920 after the disappointment of missing out on elevation to Football League.

Collier was Grimsby’s top scorer in his first season and his form led him to being called up as one of a trio of debutants for Wales’s opening Home Championship match in February 1921 against an inexperienced Scotland at Aberdeen’s Pittodrie ground. Collier equalised on 30 minutes – becoming Grimsby’s first ever international goal scorer – but Wales lost 2-1 as Scotland went on to take their British title. The other debutants, Merthyr’s David Williams and Watford’s Frank Hoddinott, retained their places for the next game in Cardiff against England. But Welsh selectors opted for Ivor Jones instead of Collier, who had previously been decorated for an act of heroism during the battle of Mametz Wood in 1916 during which he suffered shrapnel wounds to the leg. Collier later played for Barry Town but never again played for Wales.

Terry Boyle – talented rugby centre and athlete, Ammanford/Rhydaman-born Boyle had left Tottenham Hotspur for Crystal Palace in his teens where his appearances were sporadic in four seasons. In 1981 Mike England was experimenting with his defensive options as Kevin Ratcliffe won only his second cap and Paul Price his seventh cap. Price and Boyle scored within four minutes of each other to overturn a 1-0 deficit, before Terry Yorath scored late on for only his second, and final, Wales goal. Boyle was omitted from the next game, a qualifier in Turkey, but returned as a substitute for the Home Championship game versus Scotland at The Vetch.

On 71 minutes he replaced Joey Jones but four minutes later was left with a broken nose and missing tooth thanks to the elbow of Wales’s bête noir Joe Jordan who received a straight red card for the offence.

Roger Doughty, Edmund Howell – In March 1888 Wales recorded their biggest ever victory: 11-0 versus Ireland at The Racecourse. Once of the famous Druids club the famous Doughty brothers, Jack and Roger (below), were playing at Newton Heath, the precursor club to Manchester United when they plundered six of the 11 goals between them. Jack had already won four Wales caps before Roger joined him in the line-up for the first time. Both scored within the first three minutes to set Wales on their way. Jack added a further three goals with Roger doubling his tally with Wales’s ninth. Roger played in the following game against Scotland, in which Jack scored Wales’s consolation in a 1-5 defeat, but never played again.

Wales added a tenth through William Pryce-Jones but he then had to leave the match early along with Alfred O. Davies and Edmund Gwynne Howell in order to catch a train. Howell, the only ever Welsh international from the Builth club, was making his debut and scored the fourth and eighth goals before departing the field. He made a further two appearances in later seasons versus England scoring on his final appearance in 1891 for a played three, scored three international record. He continued to play for Builth for the remainder of the 1890s before serving in the Boer War in 1900.

David Lewis, Dick Wilcock – Ireland were the runts of the litter in the early days of the Home Championship and in 1890, two seasons after the 11-0 hiding, returned to face Wales in a match notable as the only time Wales ever played a ‘home’ game at Shrewsbury.

The Old Racecourse was the venue for another easy win, 5-2, with Bangor’s David Lewis and Oswestry’s Dick Wilcock scoring debut goals. Lewis won a further cap, but Wilcock never played for Wales again.

Henry Sabine – another Oswestrian goal scoring debutant versus Ireland was Henry Wilmshurt Sabine. The match was notable, as described in Phil Stead’s Red Dragons, not just because the match in Belfast was Ireland’s maiden victory, but because Wales struggled to raise a team. Only two of the starting XI had played more than once for Wales, and Sabine, whose eligibility for Wales was at best was tenuous, was one of six debutants; one of whom, Alexander Hunter was the FAW’s secretary and having to make up the numbers. An outfield player had to play in goal.

Sabine scored the consolation in a 1-4 defeat and never played again. He lived until he was 90 when he was knocked down by a bus en route to a cricket match in Yorkshire.

Albert Davies – part 1 of this blog featured Robert Roberts of Rhosllannerchrugog FC scoring on his debut in a 2-7 defeat to Ireland in 1891. Wales’s second goal that game was scored by Shrewsbury Town’s Davies in his only international appearance.

Brian Godfrey – in a decade of slim pickings for Wales, the Flint-born creative midfielder can consider himself unlucky to win only three caps in 1964 and 1965. Wales lost in each of the games: at home to Northern Ireland and away to Denmark and Italy. In the NI match at The Vetch Godfrey was one of four Wales debutants; there were a pair of debutants for NI as well: Pat Jennings and George Best.

James McLaughlin, playing at his club ground, opened the scoring for the visitors with Godfrey equalising on 24 minutes. Wales eventually lost 2-3. Three weeks later Godfrey was twelfth man for Preston in their FA Cup final defeat to West Ham United. Godfrey once scored four goals in nine minutes for Preston in a 9-0 rout of Cardiff City.

Ron Davies – Wales’s other goal in that NI match was scored by Holywell-born Ron Davies on his debut. Davies was working at Shotton steelworks when he was spotted by Chester City. Davies made his professional debut in March 1960 as Chester successfully managed to avoid needing to apply for re-election to stay in the Football League. In each of following two seasons Chester finished rock bottom of the league, but Davies was the club’s top scorer in both seasons. These secured him a move to Norwich and subsequently Southampton where he established himself as one Europe’s finest headers of the ball.

After his goal scoring debut he scored on his third cap in Rio de Janeiro against Brazil and went on to score seven times in his first 15 caps as he developed a good partnership with namesake Wyn. However the late 60s were not kind to Wales and in his 29 caps (8 goals) he was on the winning side only twice, both against Northern Ireland (1968, 1970). 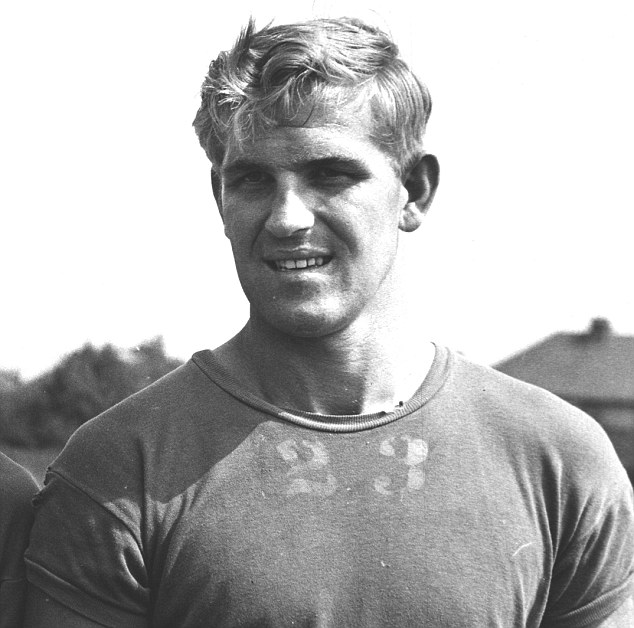 Graham Moore – the “golden boy of Welsh football” was combining football for Bargoed YMCA with working at Penallta Colliery near Ystrad Mynach when he signed for Cardiff City as a 16 year old.

Moore scored as a 17 year old in the last minute of his Cardiff debut in 1958. He did likewise at Ninian Park against England to snatch a draw for Wales in the 1959-60 Home Championship and help Wales to a three-way share of the title that season, playing in each match of the championship. That season was a successful one for Moore who scored the goal to secure promotion for Cardiff back to the English top-flight and was the first footballer to win the BBC Wales Sports Personality of the Year.

A one in three strike rate at Cardiff saw him move to Chelsea and then Manchester United but injuries disrupted his career with only nine further caps following in the next nine years until he won his 13th cap in the 1969 Home Championship. Further caps followed as Moore’s career wound down at Charlton and Doncaster. His only international goal, however, remained that debut strike.

Billy Foulkes – Merthyr-born William Isaiah  Foulkes scored with his first touch on his first appearance at Ninian Park against England in 1951. Days earlier the outside right had transferred from Chester to Newcastle United, where he won the FA Cup at the end of first season as a Magpie. Foulkes later returned to Chester where he remains in the top 10 for most club appearances. He later ran a milk bar in the city where he died at only 52. He won 11 Wales caps.

Ian Walsh – St David’s-born Walsh ended his short three year Wales career with an impressive strike rate of seven goals in 18 caps. He scored in the 24th minute of his debut against Ireland at The Vetch in 1979 and scored a further five goals in his fist six caps. He came through Crystal Palace’s youth set-up and was part of the so-called Team Of The Eighties that won promotion to the English top-flight in 1979. His caps were limited by the emergence of strikers of the quality of Ian Rush, Mark Hughes and later Dean Saunders. Walsh later played for Swansea, Barnsley and Grimsby before injuries forced him into early retirement. 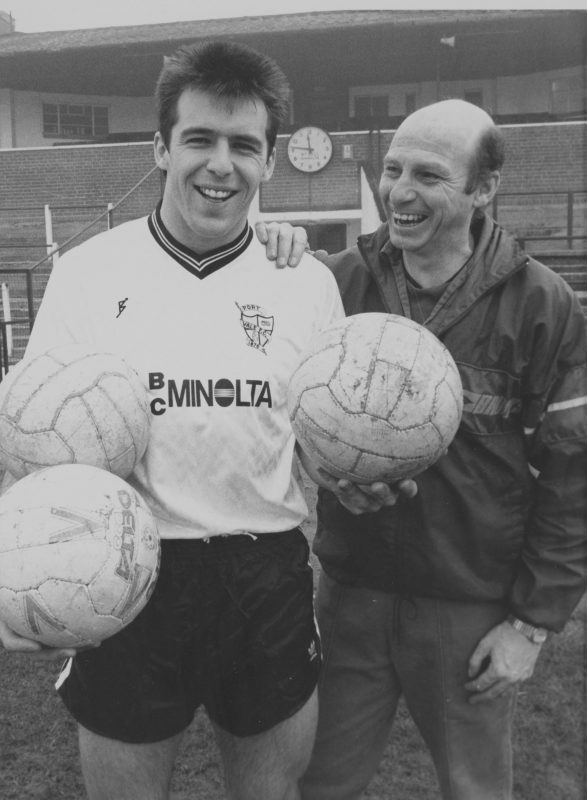 Andy Jones – in 1987 Wrexham-born Jones went from mid-table Fourth Division to the European Championship qualifiers when he was selected to face Finland at The Racecourse, where he had previously failed to make the grade as a youngster. Jones graduated to the Football League relatively late when he signed for Port Vale as a 22 year old. He scored 37 goals in all competitions in the 1986-87 season despite Vale’s mixed form and pounced for a volley to score Wales’s fourth and final goal in a straightforward win, with a large contingent of Port Vale fans making the short journey to Wrexham to support their hero. A month later he scored five against Newport County in the penultimate match of Vale’s season.

Jones featured in each of the five remaining matches of the unsuccessful Euro 88 campaign by which time, after four goals on the opening day of the 1987-88 season, Jones had moved to the First Division with Charlton. The move didn’t work out as Charlton struggled and Jones made only one further substitute appearance for Wales – as a replacement for debutant Iwan Roberts against The Netherlands in 1989.