Is Gareth Bale already Wales’s GOAT – Greatest Of All Time? Leon Barton thinks so, and considers the iconic moments that justify this status.

It was the moment that all but sealed qualification and ended the 58 year wait. After 82 minutes of toil – with a patient Wales team battling against stubborn (if limited) opponents, a rock hard pitch, sultry Mediterranean conditions and truly terrible officiating – Aaron Ramsey poked the ball between two Cypriot defenders on the right hand side of the field.  It was a pass which almost spoke to it’s receiver, saying ‘take this on and get it into the box’.  Right wing back Jazz Richards did just that, delivering a peach of a cross towards the penalty spot where, hanging in the air with a mass of bunned hair, like some sort of Samurai basketball star, was Gareth Bale, to power the ball home off his forehead.  Cue absolute scenes. The facts may have been that there were eight minutes plus injury time to go in the current match, and another win needed from the three remaining games, but Cyprus had nothing left, and there was a home tie versus Andorra to come a few weeks later.  This was the moment.  Bale knew it, the rest of the players knew it, the bench knew it, the manager knew it, the rest of his staff knew it, the three thousand well-oiled but still sunburned Welsh fans in the stadium knew it.  Scenes. 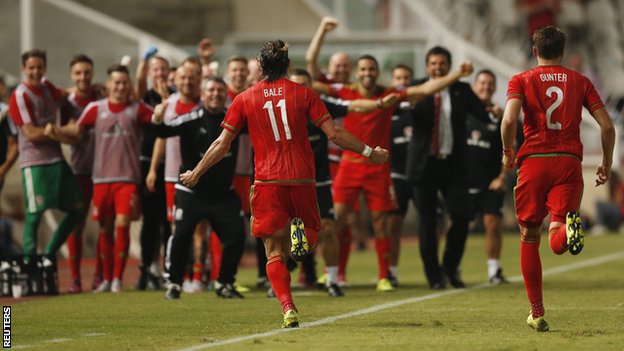 It was also a sign of the Bale to come.  With nine headed goals for Real Madrid in the 2015/16 season- more than any other player in Europe’s top leagues – powerful headers following athletic leaps have become almost routine.  Football 365’s John Nicholson, a writer whose work I generally love, wrote of Bale a few years ago that he was only effective because of his pace and powerful left foot shot.  Nobody would write anything of the sort now.  ‘It was a header out of the big John Charles soccer book’ said Chris Coleman afterwards.  By favourably comparing Bale’s aerial prowess to the player long considered the nation’s greatest of all, perhaps the manger was also inadvertently adding more weight to an argument already being made by many supporters: Gareth Bale, a 26 year old with potentially more than decade of football to come, is already the greatest Welsh footballer of all time. And given the global power and popularity of football, to my mind, this automatically makes him the greatest Welsh sportsperson of all time too.Although far too young to have ever seen the great man in action, I have watched enough clips and read enough about John Charles to know that he was truly special.  You obviously don’t get voted the greatest foreign player to play for Juventus without being a bit decent. But as my Podcast Pêl-droed colleague Richard Owain Roberts said in podcast #20 that ‘Charles was the ultimate battering ram player…but I don’t think he ever scored a goal after picking the ball up in his own half’.  Bale has, more than once, including the winner in a Copa Del Rey final against Barcelona.  Aside from Charles, who else competes for the crown of Welsh GOAT? Ian Rush was the sharpest finisher I have ever seen, a veritable goal scoring machine and a tireless worker for the team.  Ryan Giggs had truly breathtaking ability and won more medals than I’ve had hot dinners or he’s had mistresses (maybe…). Neville Southall was arguably the world’s greatest goalkeeper in the mid-eighties. But none were able to bend a Welsh qualifying campaign to their will the way Bale just has.And it’s a will of iron.  It’s easy to forget now that he’s the world’s most expensive player (sorry Cristiano) and about to play in his second Champions League final in three years, but outside of Wales Bale was a joke figure to many just a few years back.  ‘Spurs flop Gareth could Bale out in January as Birmingham eye 3m defender’ stated the Daily Mail in October 2009. And after failing to register a win in his first 24 league appearances there, many Tottenham fans would have driven him to the Midlands themselves.  It was perhaps at this testing time in his club career that Bale’s special relationship with Welsh fans was forged.  He put in a stunning performance against Euro 2008 semi-finalists Russia in the September of that year.  Given a free-to-roam role by manager John Toshack, the then 18 year old scared the life out of the Russians with his hard running and ball control (he conjured a wonderful assist for Joe Ledley and also won a penalty, which he had saved. It didn’t put him off his game though, another sign of his steely mental strength) Following a performance of exceptional energy against Liechtenstein in October 2009, with the fans singing his name to the tune of ‘Daddy Cool’ through most of the match, it was striking that he took time to applaud the travelling hordes following the final whistle (there were about five hundred of us, incredible for a dead rubber against a minnow)  Maybe I read too much into it, but this was during a period in which he was getting very little love in north London, and his appreciation of the support from his fellow countrymen seemed genuinely heartfelt.Bale’s elevation to elite Real Madrid superstar has been extraordinary, but to the extent that someone in such rarified environs can be, Bale has seemed to stay fairly grounded. As a teetotaller in a long term relationship, his extra-curricular activities (family time, golf, Spanish lessons and making unannounced visits to see sick children in hospital at Christmas) are unlikely to ever be the stuff of tabloid fodder.  And in retaining his humility in the face of such fame (8.25 million twitter followers and counting) he blows the Welsh media’s ‘rugby players are so humble and virtuous unlike their nasty horrible footballing counterparts’ narrative completely out of the water.  Not that Bale is totally immune to the trappings of success.  His Twitter profile has featured pictures of him posing with his sports cars.  But as one of the world’s top footballers he’s also one of the world’s top entertainers. Of course Bale earns a shitload of money. I’m glad he’s not embarrassed by that.He also makes a mockery of the idea that Welsh football stars don’t care about playing for their country (until recently an oft- stated opinion in Wales). Following the hard-fought 2-1 home victory over Cyprus three games into the Euro 2016 campaign, he exploded with pride and joy at the final whistle, screaming into the night sky, fists clenched.  As Barry Horne said on Radio Wales a few days later; ‘that wasn’t for the sponsors or for the media…it was pure emotion’. 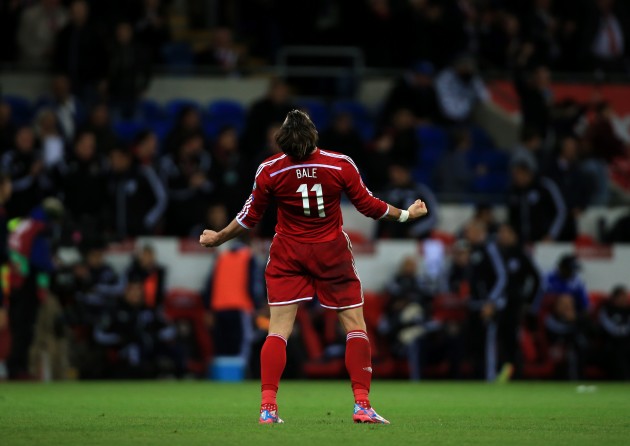 Even before the Euro 2016 campaign kicked off, there were honestly more memorable moments featuring Bale than I can remember from sixteen years watching Ryan Giggs for Wales.  Following the injustices of 1977 and 1985, any victory over Scotland is a special one for Welsh fans, even without qualification at stake.  So the way Bale brushed past arch-thug Charlie Adam to drill home a thirty yard winner two minutes from time in 2012 is a much cherished moment.  Then there was the goal which sealed our first win over Switzerland since the 1960s; the superb assist for Aaron Ramsey versus Montenegro when then-manager Gary Speed was coming under increasing pressure to get results; the amazing goal against Iceland which featured a diversion off the pitch and served as a sort of dry run for the winner in the Copa Del Rey final a few weeks later.  These are magic moments of the type that lead to repeated you tube viewings (well, for me at least) But it’s his deeds over the course of the most recent campaign which have already turned him from hero into legend in the eyes of the Welsh sporting public. Wales, as a small and unfancied nation, had been crying out for a player grab a campaign by the throat in the manner that Zlatan Zahovic did for Slovenia in the early 2000’s, and over the past two years we finally saw it.  Before a ball had been kicked it was as if Bale had decided ‘you lot do what you want, I’m playing in France next summer’ and for us long-suffering fans it’s been thrilling to watch.

Wales came close to utter humiliation at the start of the campaign in Andorra, but two stunning Bale goals rescued victory from the jaws of disaster.  Four hard fought for points in the double header at home to Bosnia and Cyprus gave us the impetus we needed before grinding out a draw in Belgium.  With the best away performance for decades leading to a 3-0 victory over Israel, the stage was set for Belgium at home in June 2015 and the occasion of Bale’s 50th cap. It didn’t disappoint.  Latching onto a terrible misjudgment from Radja Nainggolan, Bale cooly watched the ball onto his chest after a quick glance to check where Thibaut Courtois was positioned.  Then in one swift but smooth movement, he swivelled and slotted home through the keepers legs off his weaker right foot.  It may have been a gift, but it’s not one I feel many of the other Welsh players on show would have received quite so gratefully.  A massive moment which set up the trip to Cyprus and the monumental one that occurred there.  Welsh nationalist sentiment runs far higher amongst the nation’s football fans than it does in the general populace.  In this context, Bale’s non-appearance for Great Britain at the 2012 Olympics is significant. After playing the sponsorship game by posing in the GB shirt, he pulled out of the squad just ahead of the tournament, citing back problems. As it turned out, these problems weren’t serious enough to stop him playing – and scoring – in a pre-season friendly for Spurs in the USA.  ‘He said he had a bad back, fuck the union jack’ Welsh fans sing, gleefully (TV producers; consider yourselves warned).     The Duke of Cambridge may be welcome at Welsh rugby internationals, sporting a shirt featuring his father’s feathers.  But he’d be well-advised to stay away from Welsh football matches.We don’t need an English prince to represent Wales on the world stage.  We already have a king.