As guests of Vauxhall Wales and the Football Association of Wales Russell Todd had the pleasure of watching the Wales squad train ahead of Euro 2016. Here are some of his observations.

Last year Wales fan Nathan Low kindly provided us with a great insight into the preparations ahead of the friendly with The Netherlands. I was lucky enough to get the opportunity with my 8 year old son, Morgan, to witness matters at first hand yesterday. That it was the first session after the final squad had been announced made it all the more exciting, as some extra special touches were being laid on by the warm hosts, Vauxhall Wales.

Having been warned that the squad were on a tight schedule and extremely focused on preparations for the Euros (I should bloody well hope so too…) it was clear we were being encouraged not to get our hopes too high for much interaction with the players. We were escorted out to one of the training pitches where we were invited to line up for a photo with the players. Morgan was excited at having stood behind “Gareth Bale and David Cotterill” (it was Bale and James Collins actually). As the players returned to their drills a spontaneous, organic round of applause rippled throughout the visitors. For most of us this was our first opportunity, certainly up close, to express our gratitude to them for their recent achievements.

We then watched the players split into groups and go through their warm up routines: Bale, Ramsey, Allen, Ledley and Robson-Kanu in one group; the three first choice goalkeepers plus Chris Maxwell who has remained with the squad; the rest of the squad into two much larger groups. 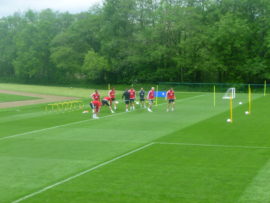 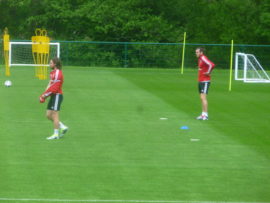 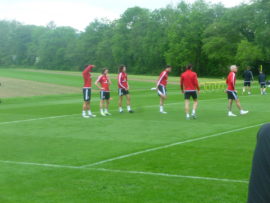 Interestingly Wes Burns and Paul Dummett remained part of the latter groupings despite not being part of the tournament squad. While it was intriguing to see under 17 internationals Ethan Ampadu and Tyler Roberts take part in the lighter training that the former group were undertaking.

at one point they were training separately with Bale, Rambo, Allen and HRK pic.twitter.com/wHCAXTyUxj

Of these, it was clear Ledley, Allen and Robson-Kanu were on lighter duties due to their rehabilitation from injury, while presumably Bale’s Champions League extra time exertions require careful nursing. Ramsey perhaps too has had a niggle. Speaking of Ramsey, his peroxide really is quite something.

Nathan spoke of it in his observations last year, but the intensity and pace of training was striking. Osian Roberts and Paul Trollope, and only very occasionally Chris Coleman, were instructing the players through short, sharp activities that appeared to be being meticulously timed. 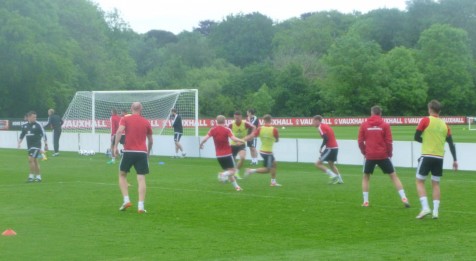 In small squares approximately 20-30 ft square the two larger groups tried to retain possession in their teams while their opponents sought to obtain possession or disrupt the passing. James Collins in particular played like a man possessed and his potty mouth betrayed his competitiveness. Jonny Williams’s technique shone in this almost frenzied activity. There were also attacking and defending exercises with the likes of Williams, Burns and Vokes taking on Collins, Chester, Richards and Davies. Again Jonny’s poise, close control and short, intricate passing caught the eye.

Bale and Ramsey by this time has sloped off and were kind enough to sign shirts and mementos and pose for pictures, though neither spoke at all and Ramsey seemed particularly diffident. It wasn’t clear why these has left early; perhaps Bale was going to provide some advice on how to secure a move to La Liga…

As this was going on Ledley and Allen continued to work one-on-one with their coaches. Ledley on strength and running, Allen on simple pass and move and twist exercises.

The press pack were in attendance as was the women’s team and intermediate coaching staff such as David Hughes in what was a really relaxed atmosphere. Danny Gabbidon was also present and fulfilled a lifelong ambition to have his picture taken with me. We discussed Panteg’s AFC season. I didn’t mention last year’s blog I wrote suggesting he partly had himself to blame for being stranded on 49 caps. For what it’s worth he still looked trim enough to play professionally.

Raffle winners and the children were escorted off to where they would meet the players, pose for photos and strive to get more autographs. So as Morgan went off with instructions to sharpen his elbows amid the likely scrum, I watched the remaining players take part in game simulations on narrow width, half pitch dimensions.

The aim was to score in the opponents goal, obviously; but whenever play broke down with a failed shot or throw-in, or when a team scored, play resumed with a particular goalkeeper resuming play with an underarm or short pass to a defender. Though Ward and Hennessey started the keepers, including Maxwell, were rotated quickly. Again James Collins was in the thick of things, even upending a teammate on one occasion. If the received wisdom is that the starting back three in Bordeaux will be Davies-Chester-A.Williams, then on this showing Collins isn’t taking that lying down. David Vaughan was unhurried, and Wes Burns impressed with his direct running. It was though, I’m almost apologetic to say, Simon Church who was the pick of the players in this session. Maybe his fruitful loan spell at Aberdeen and his goal against Northern Ireland has put some lead in his pencil because he was a menace to Ashley Williams and James Collins.

Someone call Sam Tân…Simon Church is on FIRE in training

As our time watching the players drew to a close at midday, we returned to the Castle for lunch leaving the players to carry on the session so that the majority of us didn’t get the chance to meet the players unfortunately. However, one very happy 8 year old returned adorned in what instantly became a prized possession (stoking not a small amount of paternal envy….)

The cat that got the cream pic.twitter.com/7vLOcrhv7W

So thanks to Vauxhall Wales and the FAW for their hospitality and putting on a brilliantly memorable day. Roll on the next time I’ll be this close to the players: Bordeaux on June 11th.