With the news that Danny Gabbidon has retired form professional football and signed for Panteg AFC, of division three of the Nathaniel Cars Welsh League, Russell Todd reflects on his Wales career which agonisingly finishes a cap short of his fiftieth cap.

Out of the blue on Twitter Panteg AFC announced that Danny Gabbidon had signed for the club. Despite links with Leyton Orient and clubs in North America, Gabbidon has decided to join his hometown club, for who his elder brother also plays.

We are delighted to announce the signing of Welsh international Danny Gabbidon! http://t.co/TuoYrhMcT1

Panteg finished eleventh of 18 clubs in division 3 last year with a goal difference of -19, suggesting some additional defensive steel will be necessary if Panteg are to overhaul the likes of Lliswerry, Bridgend Street and Pontypridd Town this season. Gabbidon won’t be gracing the Panteg House Sportsground any time soon though as he has punditry commitments to fulfil (which, incidentally, I thought he performed well for Radio Wales when covering the recent QPR-Cardiff City match). It is easy to sneer but in truth humility from an ex-pro in signing for a village club is a rarity and echoes last year’s news that Gabbidon’s erstwhile Wales teammate Simon Davies was paying to play for his home village club in Solva.

So what of that Wales career? In one of my nerdier moments after Wales’s game in Israel earlier this year, I calculated all current players’ ratio of caps won to games played by Wales since their debut. Gabbidon fared poorly compared to most of the current roster of internationals: 49 caps in the 112 matches (43%) Wales had played since Gabbidon’s debut against the Czech Republic in 2002. Of his immediate defensive peers, this compared with 48% for James Collins and 59% for Sam Ricketts. Unequivocally, 49 caps is a poor return for such a talent.

Injuries played a part. Having been voted Player of the Year in his debut season at West Ham in 2005/06, Gabbidon experienced four injury-plagued seasons in which he managed only 47 club appearances, and none at all in 2008/09. It is a sad fact that in that 2005/06 season Gabbidon played 39 times for West Ham but, at only 26 years old, failed to emulate that club total ever again in a season.

Such was his importance to the Wales side during these four seasons, however, that in this time he also won 17 caps. Even with little playing time, Gabbidon would immediately be re-drafted into a central defence to add class, poise and experience to complement callow youth and lower league grafters such as Lewin Nyatanga, Steve Evans and Craig Morgan. Such as in Montenegro in 2009, his first Wales appearance in 18 months, it occasionally backfired. Gabbidon’s rustiness was horribly exposed, and compounded by an early booking, he was floundering. He conceded a penalty and was at fault for Montenegro’s second. Toshack desperately needed Gabbidon to be match-fit for the upcoming crunch Euro 2010 qualifiers. He was the only centre back to play 90 minutes, but he fared little better in the second half.

In John Toshack’s favoured 3-5-2 formation Gabbidon’s confidence and ability to step calmly out of defence, allied with his pace and intelligent reading of the game, made him the perfect central pivot in that back 3. Sadly, it seldom happened during the years in which Toshack was blooding youth and whose development would have been aided by Gabbidon’s relaxed, unhurried presence. That Montenegro friendly was Gabbidon’s 41st cap. He started at home to Russia in the next game, but, with Wales chasing the game it was he who Toshack withdrew for striker Sam Vokes. Would this have been the case earlier in his international career? A thirty minute cameo appearance in the 3-0 win over Scotland later in 2009 saw Gabbidon surrounded by teenagers with youthful promise and unfazed temperaments; at just 30, he suddenly appeared old. In the following five years Gabbidon won only a further six caps, and only one in a competitive game (0-3 Serbia).

Gabbidon’s club career began to revive however with his final season at West Ham seeing him make almost 30 appearances. He remained in demand by EPL clubs, signing for newly-promoted QPR in 2011. After Neil Warnock’s sacking Gabbidon featured very little in the second half of the 2011/12 season, despite his former national manager, Mark Hughes, taking over the reins at Loftus Road.  And it is arguably Hughes who is another factor in Gabbidon’s relatively poor tally of caps as he waited until Gabbidon was 22 before he won his first international cap. Considering the ages at which most of the current squad made their international bows, Gabbidon probably missed out on another 15-20 caps, and being exposed sooner to the international cauldron might have made him an even better player. Certainly his ability and class would have been noticed sooner by other managers.

Hughes’ conservatism in blooding youth (the likes of Simon Davies, Jason Koumas and Robert Earnshaw all made their debuts at the ages of 20, 21 and 21 respectively) and disinterest of anything beneath the full squad meant Gabbidon was still winning under 21 caps after turning 22 in a European Championship qualifying campaign that, even by the standards of Jimmy Shoulder’s dismal reign, was wretched.

In one respect it is a chilling thought, but if Bobby Gould’s tenure as manager had been longer Gabbidon would surely have started playing international football in his teens; after all, Gould capped Ryan Green at 17 so was bold in capping youth in a manner Hughes never was.

His final tally of 17 U21 caps means Gabbidon is one of Wales’ most-capped players at that level, but Hughes really should have promoted him to the full team sooner than he did, even accounting for the presence of established internationals defenders like Andrew Melville, Kit Symons and Robert Page (Chris Coleman was still recovering from his broken leg around this time). But when he finally did Gabbidon took to international football with ease and a calm authority. His debut came at left back but within five months and after only two friendly caps Gabbidon was partnering Melville for the start of the 2004 Euro 2004 campaign in Finland. His fourth cap saw him memorably mark Alessandro Del Piero out of the game as Wales deservedly beat Italy. Gabbidon also played his part in the decisive, winning goal with a perfectly weighted pass to John Hartson. 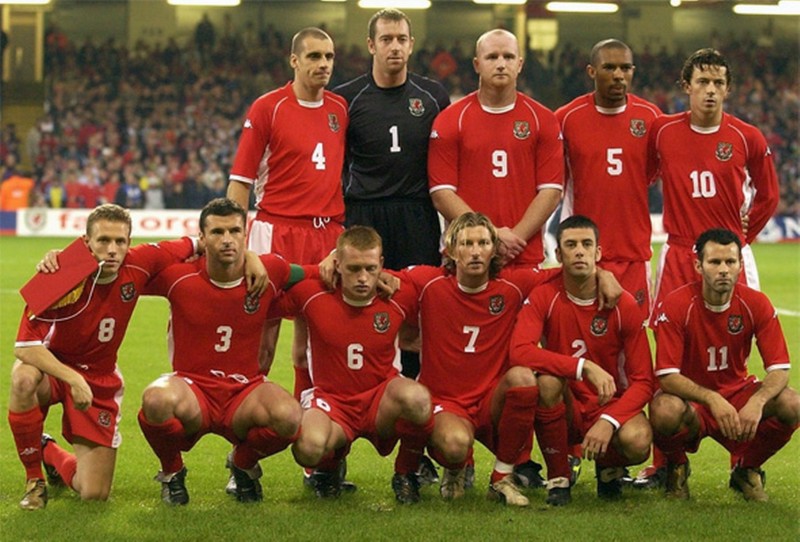 Gabbidon, much to Del Piero’s disbelief, was still playing in League One. Indeed, he remained with Cardiff City for another two seasons before ascending to the EPL with West Ham in July 2005. In a recent Twitter Q+A Gabbidon cited Del Piero as the toughest striker he ever faced but the esteem was mutual, if the possibly apocryphal tale is true; it is often claimed that Del Piero called Gabbidon the best defender he ever faced.

In the following seasons Gabbidon established himself as one of the classiest centre backs in the EPL and with James Collins providing a robust and physical defensive foil for Cardiff, West Ham and Wales the prospect of a long-term club and country defensive partnership appeared likely. Injuries to both players undermined this and in October 2010 despite being selected by Brian Flynn for his caretaker stint in charge, Gabbidon announced his retirement from Wales duty. Flynn was “disappointed” with the manner in which the announcement was made, with Flynn claiming not to have been contacted by the player. Like others Gabbidon’s commitment to the cause during Toshack’s reign had been questioned by fans. With the limited Danny Collins stepping into the breach Gabbidon missed a pair of games that had he played in would have seen him eventually pass the half century for Wales. Within four months he had reversed the decision and made himself available for selection by Gary Speed. By this time Ashley Williams was Wales’s first choice centre back and in an ironic parallel Gabbidon was kept out of the Wales side by a Cardiff player who, for a year-long purple patch at least, was able to step off Cardiff’s bench, shrug off his utility player tag and stifle far more esteemed striker opponents: Darcy Blake doing to Wayne Rooney what Gabbidon had done to Del Piero years earlier.

Though the caps were few and far between and, like one of his best friends in football Robert Earnshaw, those he did win were in low key games, he continued to make himself available. His move to Crystal Palace went much the same way as his stint at QPR: starting an EPL season in the team but after a mid-season managerial change being he was consigned to the periphery. His return to Cardiff was even worse (only a single League Cup appearance). Despite this he was a regular inclusion in Chris Coleman’s squads making a half time substitute appearance versus Iceland in 2014 and started the pre-World Cup friendly in The Netherlands. Despite little club action Gabbidon rolled back the years and nurtured debutant James Chester with a vintage performance against a forward line of Sneijder, van Persie and Robben that within weeks put five past the world champions. It bode well for his forthcoming season in the Championship with Cardiff and suggested he had another season, maybe two, in him with Wales. Ben Davies’s emergence as a capable centre back, as well as Chester’s continued progression, has seen Gabbidon be slowly squeezed out of the squad, Coleman omitting him for the Israel and Belgium qualifiers in 2015.

So after 49 caps and over 400 club games a career that on the evening of 16th October 2002 suggested might establish Gabbidon as one of Wales’s all-time greats has drawn to a close, notwithstanding his Gwent homecoming. Gabbidon can be considered unfortunate with the injury problems and managerial whims that affected his career; but he must also bear a degree of responsibility as well for the circumstances leading up to and surrounding his temporary ‘retirement’. He will probably also recognise that Wales are a far better outfit in terms of personnel, infrastructure, coaching and tactics so that players – possibly some who lack the ability he had – have been able to thrive in a more professional, elite environment than he ever experienced in the early 2000s. Certainly, had Gabbidon been a member of Brian Flynn’s intermediate system that promoted excellence and prepared young players for the discipline of international football he would have had better opportunities for development than he was afforded by Mark Hughes and Jimmy Shoulder.

Thanks for the memories Danny and best of luck with the media, DJ and Panteg commitments.

Featured image courtesy of The Guardian