We Need to Talk About North Wales

Following on from Leon Barton’s recent blog about why The Racecourse matters, Ryan ap Dafydd explains why he fears north Wales might be becoming a  footnote to the resurgence of the national team and the renewed interest in it.

My formative experiences of international football were all local: Wales played home matches at Y Cae Ras (The Racecourse) home of my beloved CPD Wrecsam. My initial view of ‘international’ was therefore something touchable, close, local. I knew that if I was going to watch Wales with the old man , we would park up by Belle Vue and walk past Stuart Mason Sports (the old Milk depot) and then down Bradley Road over the railway bridge, past Wrexham Lager brewery where the smells would waft through the air, ushering us onward, then past the Art College on the corner of Bradley Road/Mold Road and then straight up the road, a stones throw. 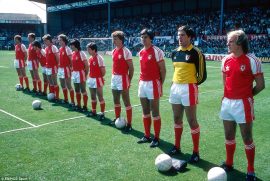 When we turned that corner the butterflies in my stomach would be doing cartwheels (do butterflies do cartwheels?). Night games of course brought an extra magic, the national grid taking a battering when the beasts at Y Cae Ras were turned on and for miles around villages like Coedpoeth, Summerhill and Brymbo could all see the floodlights burning a message into the night, sending a sign out into the darkness for us to gather.

I watched my team at Y Cae Ras and I watched my country at Y Cae Ras. Only now as an adult do I realise the impact this had on making both things ‘mine’. I watched Dixie McNeil and Mark Hughes from the same spot. I saw legends like Robbie James, Ian Rush, Leighton James, Brian Flynn, Peter Nicholas…great players.

And I knew from my Dad that this was one of the oldest international football grounds in the world. This blew me away. The weight of history was in every nook and cranny; in the Turf pub, on the Kop, the terrace, the paddock, the pies, all familiar all spectacular and romantic but all within touching distance, real and tangible. 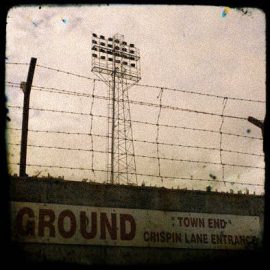 Of course Wrexham were in a kind of decline during this period, as was the ground, but we limped along for a long time getting the odd game here and there into the noughties.

I think the last game I saw was against Liechtenstein where a mercurial Jason Koumas (a Wrexham lad) pinged 30 yard passes like Lothar Matthäus and turned on a sixpence all evening. Against run-of-the-mill opposition granted, but he was different class. Incidentally, Mark Jones and Steve Evans made their international bows and Chris Llewlellyn scored his only Wales goal in the game – all Wrexham players. Newly-appointed manager Sam Ricketts also played.

In hindsight the Welsh FA relocating from Faerie Road in Wrexham to Cardiff was a huge blow and as ever (in my time anyway) we have become a provincial backwater, constantly looked over and marginalised; the Assembly and Welsh FA doing next to nothing to try and protect or preserve the ground itself from property developers and the football club from the venal clutches of such parasites.

In the late 90s I barely noticed, but all of a sudden all the big games were in Cardiff and we were heading down the A470 semi-regularly loaded up with butties and pop for the journey. I remember being excited at the time and enjoying the road trip and the bright lights of the big smoke, only now do I realise that this meant the beginning of the end of everything I’d known and that ‘international’ was now to become much bigger, different, something far away. Something less ‘mine’. Four hours down the road from its spiritual home for a kick off, but more than that, so much more. It doesn’t feel mine anymore.

The words i’m about to write will probably have me marked out as a heathen, but it’s the truth. The Euros were wonderful, I couldn’t go but obviously watched every game gobsmacked to be watching us in a tournament and crying when we beat Belgium. But there was something missing, an absence that felt bigger than a presence. They weren’t mine, I hadn’t been close enough to touch Aaron Ramsey’s boots when he took a corner, I hadn’t heard Gareth Bale swear, heard him clear his nose or seen James Chester smoking when he got off the coach (ok there are certain things that it’s good not to see).

The single most wonderful thing about the Euros was undoubtedly our fans, the whole thing will I’m sure go down as an event that helped Welsh people to think of themselves as a nation once more and help galvanise us.

The North / South divide is a load of cack. We don’t need it, politicians do, but the gwerin dont. Just like I believe in a decentralized form of politics , so I believe in a decentralized form of football. We need the powers that be to equip north east Wales with a stadium fit for purpose to use for international football matches, if only to ensure future generations of young Gogs follow the smell of hops down Bradley Road and float on a sea of wonder to Y Cae Ras, knowing that the ‘international’ can be local, real, touchable and ours. 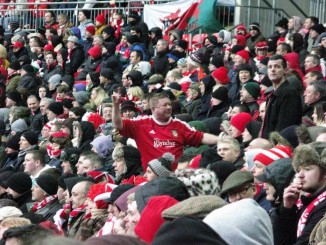 For the sake of balance, fairness and equilibrium north Wales needs more in general, but one thing is for sure we need the right support to bolster Y Cae Ras and take us into a brighter future ‘together’ as the punchy motto said. The ‘together’ part of #TogetherStronger will be compromised forever if nothing is done to redress the imbalance and restore Welsh international football to Y Cae Ras.

I know I’ve used the word international a lot here, but its significance cannot be underestimated. My understanding of ‘international’ from a young age was localised, this profoundly affected my world view and made people from places like Uruguay regular folk watching the footy too, this feeds into that word again, but this time ‘Internationalist’ because thats a huge part of the impact that exposure to different cultures has. For instance I first heard the Internationale at Y Cae Ras.

We are in danger of ‘internationals’ becoming remote. Not only would this be a shame, it would be heartbreaking and would inevitably lead to more of a rift and exacerbate the ‘them and us’ mentality between north and south.

Of course it wasn’t all plain sailing. I have stood on the Kop and watched Wrexham, Cardiff and Swansea fans all going at it hammer and tongs. They were of course different times and those days have gone forever. The Euros proved as much; our fans were inclusive, progressive and espoused a civic nationalism. We lit up the tournament.

My Dad tells me he once saw Joey Jones kick Sir Bobby Charlton so hard when he came to Y Cae Ras as Preston North End player-manager, that Sir Bobby launched into a tirade of four letter words (totally out of character) at Llandudno’s finest that both shocked and delighted the watching Town fans. It must also have taken the edge off for young lads like Joey Jones and Mickey Thomas who had swept the terraces and cleaned the floodlights before representing Wales at their clubs ground.