The Curious Geography of Welsh Goalkeepers

With the news in the run up to Euro 2016 that Chris Maxwell had been called up to Wales squad as cover for Danny Ward it meant that Wales’s four first choice goalkeepers are north Walians. Russell Todd investigates the curious geography of Welsh goalkeepers. 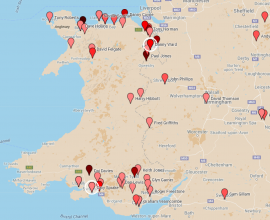 Though yet to win a cap, Penrhyn Bay/Bae Penrhyn raised Maxwell complements Owain Fôn Williams (Penygroes) and Danny Ward (Wrexham/Wrecsam) in providing back-up to Bangor-born Wayne Hennessey, who succeeded Prestatyn-born Danny Coyne, who in turn had taken over from Chirk/Y Waun-born Paul Jones.

Such was Southall’s dominance, of the succession of understudies it was Tony Norman who fared best in terms of caps won, but even then he won only five caps, between 1986 and 1988. Despite not winning a cap until after his 31st birthday, Jones won 50 caps and was the undoubted first choice as is Hennessey, and notwithstanding Coyne’s 16 caps, the goalkeeping mantle appears for several decades to have been handed from one long-term north Walian to another. But has it been mainly confined to north Walians? How do the other regions of Wales fare? 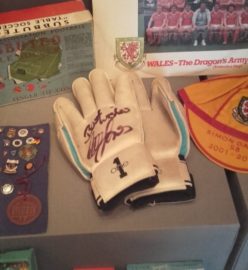 Recent one-cap wonders Glyn Garner and Roger Freestone are Men of Gwent, from Pontypool/Pont-y-pwl and Newport/Casnewydd respectively, while the ranks of Southall’s understudies in the 1980s also featured south Walians in the form of Andy Dibble (Cwmbrân) (pictured here in Canada in 1986 about to win his first cap) and Senghenydd-born Martin Thomas. Of course, Wales have also recently capped ‘Anglos’: Mark Crossley, Jason Brown, Lewis Price, Darren Ward and Andy Marriott. But these nine goalkeepers account for only 38 caps between them.

The most-capped non-Wales born goalkeeper is Californian born Boaz Myhill, but even here there’s a north Wales link as it was via his Llangollen-born mum that he was eligible to win his 19 caps, though he is unlikely to add to this total.

Hawarden/Penarlâg‘s Tony Millington and Bangor-born Dave Hollins won 32 caps between them in the 1960s, suggesting that decade was similar to the 1980s and 1990s for north Walian dominance. But the decade started and ended with goalkeepers from Swansea/Abertawe as undisputed first choices: the great Jack Kelsey (41 caps) and Gary Sprake (37 caps) respectively.

With Ammanford/Rhydaman‘s Dai Davies succeeding Sprake and Cwm Gwendraeth-born Ron Howells preceding Kelsey it suggests that both banks of the Loughor/Llwchwr broke the north’s stranglehold on the Welsh number one jersey in the 1950s and 1970s. Howells, Kelsey, Sprake and Davies won 132 caps between them. Furthermore, for many years Davies and Sprake were understudied by Dafen born Glan Letheran, though he never won a full cap.

What of the south Wales valleys or mid and west Wales? Where are the goalkeepers from the capital?

But further research merely highlighted yet more north Walians accounting for postwar caps: Colwyn Bay/Bae Colwyn pair Cyril Sidlow (7 caps) and Archie Hughes (5); Brian Lloyd (St Asaph/Llanelwy, 3); and Iorwerth Hughes (Abergele, 4). One has to go all the way back to the 1950s for the last Cardiff-born goalkeeper to represent Wales: Graham Vearncombe. In an interesting parallel to Euro 2016, Wales went into the 1958 World Cup with an experienced, long-term first choice and back-up with very limited international experience between them: Veancombe who had one cap and uncapped Aberdare/Aberdâr born Ken Jones. Though Jones never eventually won a full cap he did at least travel to Sweden. Vearncombe was one of the infamous four players named in the squad but who remained at home. He won his second and final cap in 1960.

Before 1939 north Walian goalkeepers remain prominent: Teddy Peers (Connah’s Quay/Cei Connah) who won 12 caps either side of the first World War and also played in two 1919 Victory internationals for which caps weren’t awarded;  Jim Trainer (20) and Bob Evans (10; both Wrexham/Wrecsam); Robert Mills-Roberts (Ffestiniog, 8); and, of course, the irrepressible Leigh Richmond Roose (Holt, 24). Interestingly both Trainer and Mills-Roberts were part of Preston’s original 1888 Invincibles squad, though it was the latter that played in the FA Cup Final ahead of Trainer who had been first choice all season. Other north Walians include Albert Hersee, Dick Turner and Robert Roberts.

With international eligibility much looser in the early days of the game several English-born goalkeepers were selected for Wales due to playing for the likes of Druids or Oswestry (located in England but affiliated to the FAW): Edward Phennah, David Thomson, George Glascodine, Thomas Burnett (1 cap each), Elias Owen (3 caps). 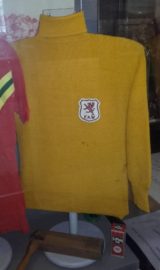 The Rhondda valleys have supplied Dan Lewis (Maerdy, 3) and Johnny King (Ferndale, 1) while Tredegar’s Bert Gray (24 caps) was part of the successful 1920s Welsh sides in a fourteen year international career. Gray remains the most capped south east Walian goalkeeper even though his final cap came in 1938. He was deputised by Llandaf born Len Evans (4 caps) and the aforementioned Lewis; though Gray’s main rival was Roy John (Briton Ferry/Llansawel) who won 14 caps in four seasons as first choice in the 1930s. If Briton Ferry/Llansawel can be considered part of a ‘greater’ Swansea region, then it is further proof of the area’s importance in supplying goalkeepers to the national cause: it is the home of one cap wonders Vic Rouse, Martyn Margetson and Jack Parry. Rouse incidentally was also the first player ever to be capped from the English fourth division. Other than Vearncombe and Len Evans the only other goalkeeper from the capital was George Poland who won two caps in Wales final games before World War II.

For mid Walian readers, it would be remiss to overlook Presteigne/Llanandras‘s Fred Griffiths who won a pair of caps in 1900, before being later killed at Passendale. Or the Montgomery/Trefaldwyn born Richard Gough who won his only cap in 1883; or Newtown/Y Drenewydd‘s Harry Hibbott (3 caps) who was the first goalkeeper to win more than a single Wales cap.

So, overwhelmingly Wales has largely relied on goalkeepers from the north and from what I have referred, perhaps tenuously, to as the ‘greater’ Swansea region.

Of the 656 caps earned by goalkeepers, 58% have been awarded to north Walians, 23% to those from Carmarthenshire and Swansea Bay, totaling 530 caps. Non-Wales born keepers account for more caps (73, 11%) than goalkeepers from the rest of south Wales (53, 8%). This, despite, north Wales accounting for only one third of the Welsh population.

A recent thread on the Apostle message board suggests that with less rugby played in the north, particularly in schools, anyone with good hand-eye coordination and catching ability there will be drawn to the round ball. Perhaps.

But the Gwendraeth, Swansea and Llwchwr valleys are also rugby hotbeds and the traditional build of goalkeepers would typically in rugby require them to do less catching and handling and more scrummaging, rucking and tackling.

That said, it is perhaps telling that of the south Walians capped by Wales since 2000 – Freestone, Margetson, Garner – all had started their professional careers before rugby union went open in 1995. Not a single south Walian goalkeeper starting his career since has won a full cap.

And although the current first choices are all north Walians, of the most recent under 21 call ups – Billy O’Brien, Michael Crowe, Christian Dibble – all are English born, suggesting we may be calling on further Anglos in the future.

Almost certainly the notoriously parochial selection politics of Welsh international football played a part. Tokenistic caps dished out to some, but selectors tending to reward their allies from their particular milltir sgwâr.

Perhaps there is a correlation between the eccentricity of goalkeepers and Gogs, Jacks and Turks? Hmm, let’s not go there…

Whatever the reasons, there is no doubting that with the likes of Roose, Kelsey and Southall north Wales and Swansea have provided not only Wales’s, but the game’s, finest goalkeepers.

Here is the dataset for all goalkeepers capped by Wales.

Thanks to Geraint for his help and advice in setting-up the interactive map, and to the Gorau Chwarae Cyd Chwarae website for data on goalkeepers before the First World War.

Bert Gray’s jersey and Paul Jones’s gloves are from the Cyffyrddiad Cewri/Touched By Greatness exhibition at Wrexham Museum. Click here for more details.