With Wales regularly replacing their kits and having worn four different kits in the recent qualifying campaign, in this guest blog collector of matchworn Wales shirts Simon Shakeshaft looks back at the so-called ‘forgotten campaign’ of the mid 1970s to find this rapid turnover in kits is nothing new. 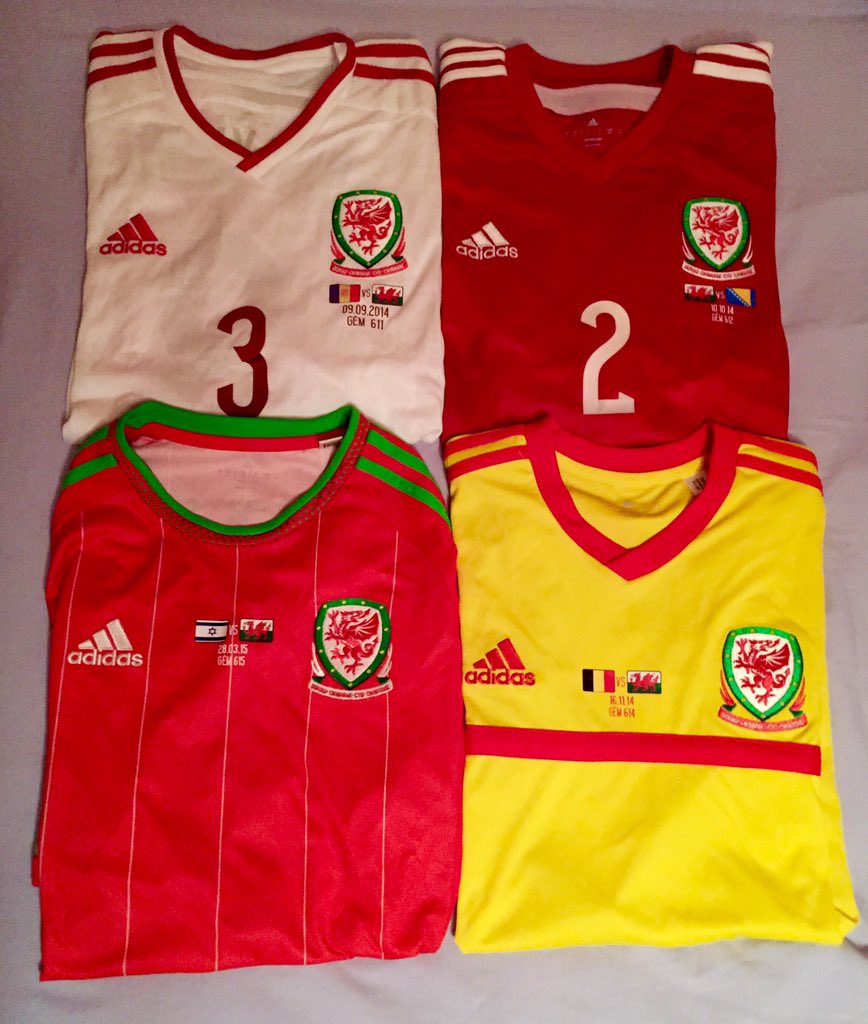 As football shirt buyers we have more recently had the chance for a proper good moan about the number of times kit manufacturers change our teams shirts. With Wales this is now a yearly change, which has technically happened every year since 2010. It just seems to be that a shirt is only worn in half a dozen games before another change is just dropped on us.

But as much as we moan, or in my case rant (though in my defence it’s been more about the colour style or design rather than the regularity of change) because of the way the contract with Adidas is set up, annual kit changes are now the norm; we aren’t happy about it but we just have to accept it. The basis of the contract with the German sportswear giant is purely down to shirt sales, and in reality is the major revenue stream for the FAW. Gone are the days of long term contracts, when the FAW were paid up front at the start of every season. It’s now all about shirt sales, pure and simple, and by buying a replica shirt we are helping put money into the coffers of our beloved governing body.

But let me take you back over 40 years to the 5th European Championship, previously the European Nations Cup or the Euros as we know them today, qualifying campaign. In the mid-1970s replica shirt sales were on the increase due to Admiral Sportswear – more about them later – crashing the market in 1974.

For many who had watched the Welsh national football team in the previous decade it had been a very painful experience. So it’s understandable that to many the re-emergence of Wales as a footballing nation during the 20 months that followed September 1974 is considered by many who were there, including a very frustrated Welsh skipper Terry Yorath, the forgotten campaign. 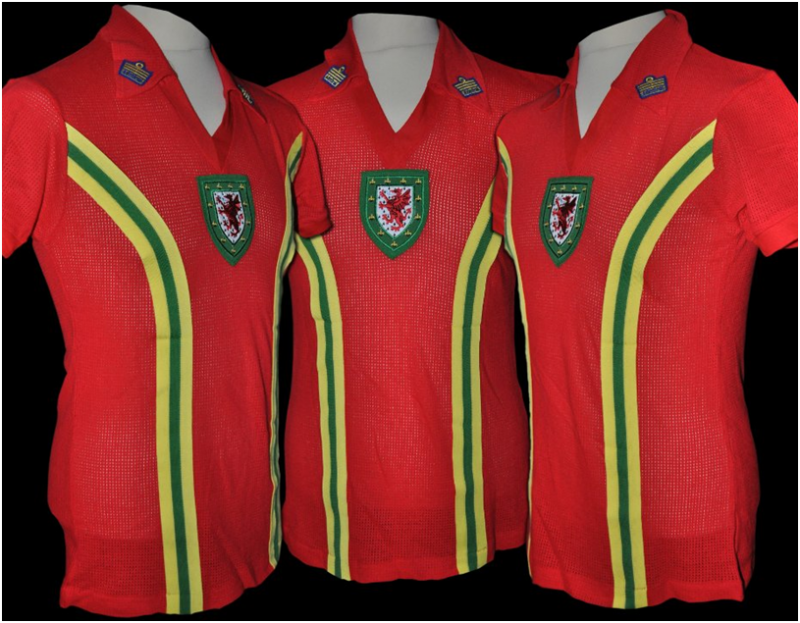 But what’s the connection between this Welsh footballing revival and my interest in Wales football shirts. Well at this stage let me just say that I am a proud member of a small group of anorak collectors of match worn shirts, those shirts that have graced the backs during action on the pitch, of our footballing heroes. Many of us buy, wear or at least have a passing interest in the shirt or kit that Wales are going to wear. Some will then collect these replica shirts they have purchased and then some who have strange tendencies to progress on to collecting these match worn versions. For me it’s the closest you can get to the match action without actually being on the pitch. And of course it’s a way of protecting the heritage of Welsh football, basically buying a small part of its history. Hark at me trying to justify my collecting. To many it’s, “What? Really?!” Or just plain boring, so let’s get to the good bit. 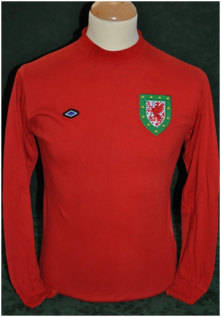 Wales kicked off their European Championship campaign away in Austria during September 1974. New full time manager Mike Smith immediately gave a 33 year old Wrexham legend Arfon Griffiths his full debut and he promptly rewarded his manager’s faith by giving Wales the first half lead. Austria turned it around in the second period and legendary striker Hans Krankl bagged the winner for the hosts with 16 minutes from time. The shirt pictured left was worn by defender Dave Roberts in Vienna.

Wales’ shirt for the campaign’s opener and two subsequent qualifiers was made by Umbro, as it had been for virtually the last 20 years, well them and Utility Clothing. “Who?” you ask; well just ask your grandparents about post war rationing. It was the first time a manufacturer’s logo had ever appeared on a Wales outfield players shirt, the small Umbro black, white and blue double diamond branding appearing on the right breast. It was also the first time since 1951 that the Gorau Chwarae Cyd Chwarae worded scroll underneath the Heraldic Crest was removed as well the disappearance of another scroll: the match detail, which had appeared above the shield regularly since its introduction. 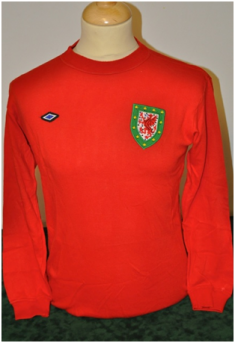 The shirt on the right was Brian Flynn‘s from his international debut as a substitute for John Mahoney in the last outing for this Umbro shirt in the 5-0 demolition of Luxembourg at the Vetch Field, Swansea in the November. The impressive win against Hungary at Ninian Park, was sandwiched between the Austria and Luxembourg games.

Wales’ visit to the Hungarian capital and their fortress Nep Stadion in April looked to be quite a daunting task for Smith’s ever improving chargers. Only the Soviet Union having ever won a competitive fixture in the stadium since it opened in 1953 and a year later it was the scene of England’s famous humiliation, when the Mighty Magyars inflicted a record 7-1 defeat on the English “superstars” of the day. Strangely though, for the visit to Budapest, Wales not only had a new strip but also a new kit supplier! Nobody knows why this change occurred but is something gotten used to with the FAW, introducing kit changes or even manufacturers halfway through a season without any rhyme or reason don’t come as a surprise anymore.

A fantastic performance, wearing the attractive daffodil yellow shirt below, saw Wales record a very impressive 2-1 victory in Hungary. The away yellow shirt pictured was worn by full back Rod Thomas in the famous win, as was the blue goalkeeper shirt by debutant Dai Davies. The daffodil yellow away was worn again in Luxembourg’s Stade Municipal two weeks later, a 3-1 win, the shirt’s second and final outing. It wasn’t until Scotland visited Ninian Park for the Home International opener that the Bukta red home shirt made its first appearance. 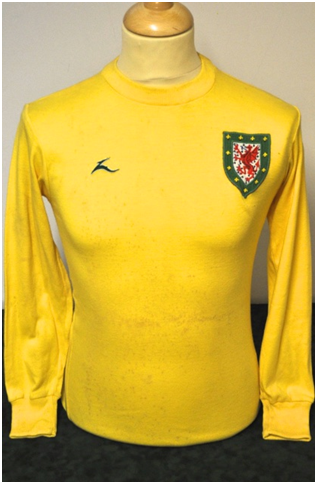 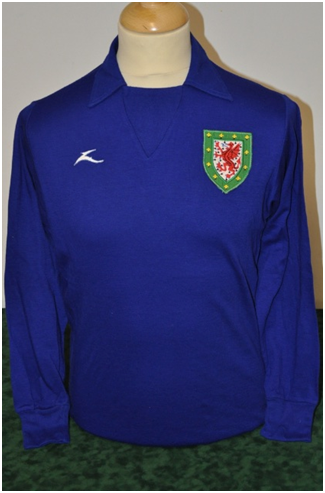 Britain’s oldest sportswear manufacturer Bukta were now providing the new Wales kit but as you’ll see, very little on the red home shirt changed from its predecessor, in fact, the Bukta Buck logo on the right breast, replacing the Umbro double diamond being the only visible difference. 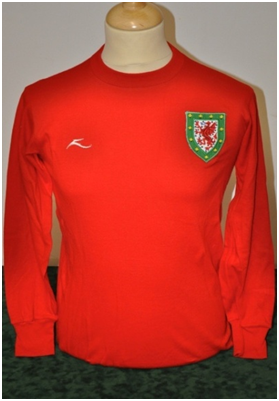 The 1975 Home International Championships were a mixed bag, all three games saw the red home shirt worn. A 2-0 lead – including a wonderful team goal scored by Brian Flynn in his first start – was blown against Scotland. The home shirt pictured left was worn in this game by Welsh captain Terry Yorath. This was followed by another 2-2 draw, something many players considered hugely disappointing after conceding a late equaliser, against England at Wembley. Disappointment at only drawing against England was a sign of how much progress Mike Smith’s team had made over the season. The good work was slightly undone in typical Welsh style, with defeat to Northern Ireland in Belfast six days after the Wembley draw.

The first game of the 1975/76 didn’t arrive until November, a full six months after the finish of the Home Internationals and shows that Wales rarely even played friendlies 40 years ago! It was the final qualifying group game against Austria at The Racecourse. Other results meant only one thing, Wales had to avoid defeat to qualify for the Quarter-Finals.

Wearing the same red home Bukta shirt as Terry Yorath’s (left) it was appropriate that it was that local boy Arfon Griffiths who should be the nation’s hero, when smashing home the game’s only goal, his fourth of the competition, with just over 20 minutes remaining

The FAW’s Centenary year saw the governing body join the football shirt revolution by again switching kit suppliers. Admiral Sportswear, the pioneering shirt designers, became Wales kit manufacturers and introduced the famous and very popular Wales “tramlines” strip. The replica shirt market was very rapidly taking off and the FAW in association with the forward thinking Admiral, joined the party by producing a very sellable shirt and sell it did!

The replica’s were made from nylon with the Welsh crest and Admiral logos a plastic vinyl, which cracked, faded and later peeled off after frequent washing and let’s not forget the static and worse, the nipple rub!! But for many a young Welsh lad it was a must-have item. The players’ shirts were all made from cotton, or a variation of cotton, the perforated Aertex material as seen in the main picture, with all the crests and logos in cloth. Again the Gorau Chwarae Cyd Chwarae scroll was omitted from below the Heraldic crest 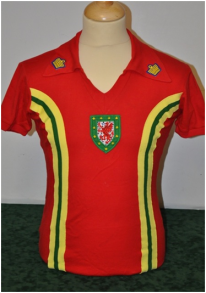 Yugoslavia were drawn out of the hat to play Wales, the only home nation to reach this stage, over a two legged quarter final. Wales had to travel to Zagreb for the first leg with the best laid plans then thrown into turmoil when conceding within the first minute. The shirt on the left was worn in the first tie by one of the squad’s unsung regulars, full back Malcolm Page. Yugoslavia added another in the second half leaving Wales having to win by three goals or at least two to take the tie to a replay in Milan.

The Home International Championships were sandwiched between the two legs but preparation for the second leg wasn’t great, two defeats and a solitary win against Northern Ireland, meant Wales weren’t in their best form for their biggest game for 18 years. 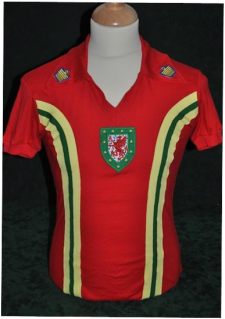 The second leg’s controversies are well documented elsewhere: strange refereeing decisions, disallowed goals, penalties – one involving John Toshack whose worn shirt from the game is pictured right – pitch invasions and ultimately the ugly scenes inside a packed Ninian Park at full time. Plenty of effort from the players wasn’t enough, a 1-1 draw on the day saw Yugoslavia progress to their own European Championship four nation finals, 3-1 on aggregate. It was a sad end to such a successful and for me fondly remembered campaign. It certainly saw Mike Smith’s resurgent squad breathe the fire of pride back into the Welsh shirt.

In just two seasons, or just eight qualifying games, Wales had used three different suppliers. Can you imagine having to buy a replica that was worn in three games, or the new home shirt worn in four, only one of which was a qualifier? Sound vaguely familiar?  Thankfully Admiral were the first to produce Wales replicas – for many of us, the shirt that started it all – and meant that the choice for kit buying parents 40 years ago was an Admiral home shirt, their gorgeous yellow away shirt or a fantastic tracksuit.

As I have already said, I’m certainly not a fan of the regularity of kit changes today; we have worn four different kits in our ten qualifying games. Let’s hope this squad can emulate the regularly overlooked Welsh heroes of forty years ago – still can’t believe we’ve qualified – and I’ll happily sacrifice a Twitter rant or two about kit styles because as a collector you know, no matter how ugly or what the colour, it has a dragon on the chest, meaning I’ve just got to try and get my hands on a match worn one!!